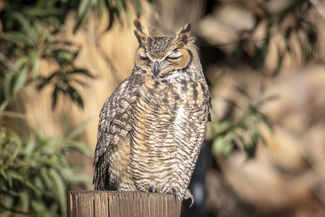 It takes a little time when 89 volunteers are wandering around the desert recording all the birds they see, but the final results of the 2018 Christmas Bird Count are finally in.

Just before Christmas, volunteers spread out in a 15-mile circle centered on de Anza Country Club to participate in the 36th annual count that is part of a nationwide event that began 119 years ago.

This citizen science project is known as the annual National Audubon Christmas Bird Count and involves a census of wild birds at thousands of locations in North America.

The event began with 27 birders on Christmas Day 1900 and now involves over 80,000 counters at 2,500 North American locations from Mid-December through early January.

Audubon and other organizations use data collected in this important wildlife census to assess the health of bird populations, migratory trends, habitat conditions and other factors impacting wild bird populations. This information can also help guide conservation efforts.

The Borrego Count is one of six in our region, with others conducted in circles around Salton Sea, Lake Henshaw, Escondido, Rancho Santa Fe, Oceanside and San Diego.

Retired Anza-Borrego Desert State Park Ranger Bob Theriault serves as the local coordinator for the Borrego Count with the assistance of Borrego resident Terry Hunefeld. It's Theriault's task to gather all of the recorded sightings, check them for accuracy and then submit the final results to CBC regional editors.

This year the Borrego census logged a total of 8,872 birds, including 122 species. Overall, these numbers are very similar to the past few years, however, there were some notable variations.

On the plus side, the number of ring-necked ducks increased from 29 to 82, and the colorful northern flicker jumped from 35 to 86. The American robin seems to like Borrego, and the count numbers jumped this year from 16 to 188.

On the down side, European starling dropped to 238 from 483 last year, and the year-round resident black-throated sparrow was alarmingly down to 35 from the previous 295. Western meadow larks were also down to only nine compared to 88 last year.

Theriault said the common house sparrow experience a collapse in numbers in 2014, and while numbers are holding steady, the bird has yet to rebound to former numbers.

The annual count is a birding highlight for many volunteers, some of whom also participate in several of the other regional counts.

Depending on their locations, counters started as early as 3 a.m. – those were the owl hunters – and fanned out all over Borrego Valley from residential areas, palm groves, nearby canyons and mountains, Borrego Sink and Coyote Canyon.

Some areas required four-wheel drive, and others could only be reached by demanding hikes, like he counters who ventured into the upper groves of Palm Canyon.

It's not all work and no play. In the afternoon, volunteers began to arrive at the UCI Desert Research Center where more volunteers prepared a hearty lunch of hot chili, corn bread and assorted dessert goodies.

The annual bird count is also a great way for novice birders to learn about the birds in their area. Teams are usually lead by an experienced birder.