Forgive Them, For They Know Not What They Do 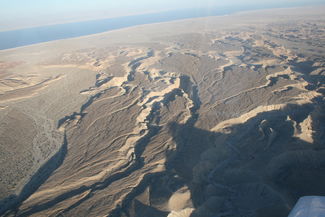 Off-road motorcycling is both fun and challenging. And riding where none have ridden before can be part of a freedom-inducing experience. Not included with the license to ride, however, is the unfettered license to destroy.

While the year is uncertain due to a lack of witnesses or timely reports (perhaps in the early years of the 21st century), one or more motorcyclists thought they'd have some fun doing donuts (eight of them, each 15-25 feet in diameter) in the foothills west of the Salton Sea; that is, knobby rear tires spinning and digging into the ground and making circle after circle after circle, throwing up lots of dust and rocks.

Donuts would not be a problem in designated off-road areas, but these folks went out of their way to find terrain in which no modern humans had trekked. The donuts scarred the pristine landscape, and also obliterated portions of at least one of the nearby ancient Cahuilla Indian footpaths, visible from the air (see photo) and from Google Earth images.

Around 2006 the damage was reported, and it turns out the spinning tires severely disrupted the thin, pristine crust of an ancient alluvial fan south of the Torres-Marinez Indian Reservation, near the intersection of San Diego, Imperial, and Riverside Counties. The thin, dark patina (aka "desert varnish") is comprised of manganese oxides and takes many decades or centuries to form under arid desert conditions.

Because of an historical paucity of weathering on the fan slopes (the washes change with any amount of rain), "The disturbed land between the washes will therefore take decades, perhaps centuries or even millennia to restore naturally," says geologist and pilot Chuck Houser, first to identify the donuts from the air.

It's not that off-roading should be eliminated, says Houser, but rather that folks use their common sense and get the message that sensitive desert areas "with both cultural and historical significance that define our heritage" should be preserved. He cites as an example of desert awareness that bikers ride in the washes between pristine alluvial fans for ingress-egress, and then walk up to (and appreciate) undisturbed fan areas.

While it's only speculation as to whether or not those motorcyclists knew the lasting damage of their actions, one thing is certain: Long after we're all gone, those donuts won't be.