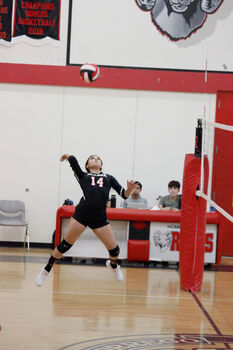 A force at the net, sophomore Abigail Gonzalez, gets another kill over Palo Verde.

It has been a back-and-forth season so far for the Borrego Springs Lady Rams volleyball team. Minor mishaps here and there, but the Lady Rams continue to battle it out.

Looking to go on a win streak and knock in wins in the win column, the team hoped to get that chance as they faced off against the Palo Verde Lady Hornets on Sept. 14 at home.

The team also faced Calipatria on Sept. 16 at home, winning in three sets.

They then kicked off Southern Citrus League play against West Shores on Sept. 21 at home, where. the Lady Rams won in a three-set sweep.

The Lady Rams were back at home for two more league games against San Pasqual and Julian, which took place after print.

Against the Lady Hornets of Palo Verde, it was a slow start for the Lady Rams, who continued to battle, not wanting to be down too much early in the set.

The Lady Rams started to find some rhythm after a kill by senior Jimena Ochoa, 9 – 5.

Back-and-forth both teams went, and a set by freshman Janessa Nehrer to sophomore Abigail Gonzalez for the kill, 10 – 7, Lady Rams down three.

But once again, the Lady Hornets held onto the lead, despite the Lady Rams efforts – aces by junior Mariana Torres and kills by Ochoa and Gonzalez. The errors continued to catch up to the Lady Rams.

Both teams exchanged hits and errors, but it was the Lady Hornets who gained some momentum, and pulled ahead to take the set, 25 – 17.

In the second set, the Lady Rams had their first lead of the game at the cost of a Lady Hornets violation and an error, 2 – 0. However, they managed to get right back on the board and tie it up at three a piece.

Ochoa, Nehrer, Gonzalez and sophomore Ailene Arias did their best to keep the ball alive in long rallies, but the Lady Rams were down 10 – 6.

Back-and-forth hits on both sides, but the Lady Hornets continued to add to their lead, 18 – 11.

The Lady Rams chipped away and found their rhythm, which started after a big block at the net by Arias.

A sideout by the Lady Hornets, followed by back-to-back aces by Ochoa and a kill by Torres, the Lady Rams were down just one, 21 – 20.

The last few points were quite a thrilling one, as tensions were high.

A tie game at 21, Torres with another kill, and in their efforts to block it, went out, giving the point to the Lady Rams.

Both teams exchanged errors, hits and outs, a fight to the finish, but the Lady Rams came out on top in the second set, 25 – 23.

With a set a piece, the Lady Rams hoped to keep the momentum on their side going into the third. Though, Palo Verde once again started out on top, getting on the board early, 3 – 0.

As both teams continued to take on long rallies with solid hits all around, the Lady Hornets were still ahead, 6 – 4.

Nehrer with back-to-back aces tied the game up, and started the Lady Rams rally. However, Palo Verde didn't give much breathing room of a lead for the Lady Rams as they took advantage of errors.

The set went back-and-forth until the Lady Hornets found their groove as they extended their lead, 17 – 13. With an exchange of outs, errors and hits, the Lady Hornets came away with the set, 25 – 20.

In their hopes of tying up the game at two to force a game five, the Lady Rams came out the gates ahead with a 3 – 0 start. But with the Lady Rams miscues, the game was tied up once again.

Junior Jasmile Lopez and Torres had a kill and an ace, respectively, to retake the lead, 5 – 3.

The Lady Hornets then went on a scoring streak but was quickly answered right back and the game was tied again, 8 – 8.

There was a lot of back-and-forth, and it was still anybody's set.

Gonzalez at the net, once again, a force to watch out for, had another kill but the deficit was still four, 15 – 11.

Despite the Lady Rams efforts at chipping away, many of the hits were not going the way they hoped for and the Lady Hornets took the set, 25 – 17, and sealed the game.

The Lady Rams have many things working for them on all fronts, and when their momentum gets going, they surely are a solid team. However, as with many teams, they have things to work and improve on, and it will be interesting to see how the team will tweak those areas as the season goes.

The team is back at home against Calexico Mission on Wednesday Oct. 5, 4 p.m.