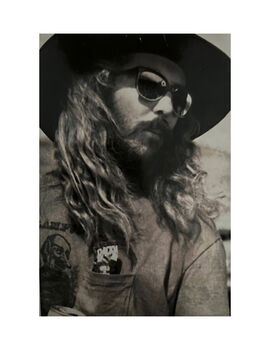 It is with great sadness to tell you that Steven A. Pretot passed away June 27, 2022, at the age of 65 at his home in Borrego Springs California.

Steve was born to Don and Claire Pretot September 11, 1956, at Hillside Hospital in San Diego Ca. Steve lived in Alaska with his parents for a few years as a young child and then moved back to El Cajon, California. While living in El Cajon, Steve gained a sister, Valerie. He played little league and was a pitcher on his team. On weekends, our family would go camping mostly in Ocotillo Wells.

In the 60's, the family moved to Ocotillo Wells and built Mobiland. Steve rode dirt bikes, three wheelers, dune buggies, he knew the desert like the back of his hand.

He went to school in Borrego Springs and as soon as he could he started playing sports, baseball, football and basketball, he was the pitcher and quarterback. He was BSHS' first .500+ hitter and was very athletic. Steve graduated from Borrego Springs High School in 1975 and the Monday after, he and his best friend Dale Cartier went to work for the local cable company running a ditch switch and installing miles of underground cable so everyone could have cable TV.

In 1982, Jacob Kaine Pretot was born and he was the light of Steve's life. Steve was a cement contractor by trade and he and his many friends who also worked in construction worked on several projects in Borrego Springs and the surrounding area in the 70's, 80's and 90's. You could say "they built this town."

Steve had many hobbies, hunting, fishing, gems, and arrowhead hunting to name a few. He was also very artistic and that came out in his work for people who needed fire pits, sitting areas and anything concrete, rock, block or stone.

In July of 2011, Steve was diagnosed with cancer of the heart and told to get his affairs in order because he would not see Christmas. After very aggressive chemo treatments Steve beat it and remained cancer free up until this year. The cancer had returned with a vengeance.

Steve had a heart of gold, he was generous, kind, and compassionate and would always lend a helping hand. If you would like to do something in memory of Steve, please just pay it forward and help someone out. He would like that.

Steve was preceded in death by his mother, Clarice, his father, Don, and his son, Kaine. He is survived by his sister Valerie (Pretot) DeVeau, Paul DeVeau, Brittney DeVeau (niece) of Santee, California. and his long-time partner Joanie Hildebrandt of Borrego Springs, California.