The Moon and the Gas Giants 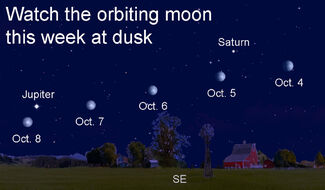 The moon's 2,200-mile-diameter orb will be sunlit from the west, which, as you might expect, is where the sun lies just below the horizon.

The most prominent "star" on the celestial stage this week will be the moon.

It will reach its first quarter phase on the evening of Sunday, Oct. 2, when you will see it due south at sunset. Its 2,200-mile-diameter orb will be sunlit from the west, which, as you might expect, is where the sun lies just below the horizon.

This is a great time to aim binoculars or a small telescope at the moon. If you do, check out the darker areas on the lunar surface. These are regions known as "mare" or "seas" and are huge plains of solidified magma that welled up from deep within the moon after violent impacts during its early evolution.

You will also notice many craters and mountain ranges along the terminator -- the boundary between light and dark. They appear quite dramatic in this region where sunlight shines on the lunar surface from a low angle and creates long, stark shadows, much like it does here on Earth at sunrise or sunset.

Over the next few nights, watch as the moon changes its position as its orbital motion carries it eastward through our sky. The terminator will also drift eastward across the lunar surface until the moon reaches its full phase on Sunday, Oct. 9. It's on that night that the moon rises in the east just about sunset.

During its orbit, the moon will appear to pass some bright stars and planets. Of course, this is only an optical illusion; despite how it appears to our tiny terrestrial eyes, the moon is hundreds or thousands of times closer to us than the planets, and many millions of times closer than even the nearest of stars.

On the evening of Oct. 4, look for the moon to lie just to the west of the bright planet Saturn. The following night you will see it just below Saturn, and by the 6th the moon will have drifted far enough eastward that it will appear to be leaving Saturn behind.

But don't end your observations there. The moon will continue its eastward journey and will pass by the brilliant planet Jupiter in much the same way on Oct. 7 and Oct. 8.

As long as you've got your telescope out, why not turn it toward the planets as well?

Aimed at the brilliant planet Jupiter, which has a diameter 11 times that of the Earth, a backyard telescope will show the planet's clouds as tan and white bands that stretch across its equatorial diameter. Among the most exciting of Jupiter's sights is its family of moons, four of which (Io, Europa, Ganymede and Callisto) can be seen dancing around their parent planet from night to night.

Pointed toward Saturn, even a low-powered telescope will show the planet's spectacular ring and its largest moon, Titan. If sky conditions are good, you might even spot some tan cloud bands in Saturn's atmosphere, as well as the Cassini Division -- a thin black division in the ring system itself.

Perhaps the best part of it all is that you can watch this celestial show even from under the bright lights of a large city!