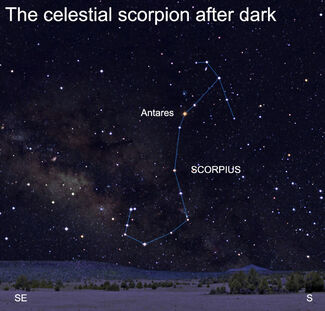 Antares marks the heart of this celestial arachnid, one of the most recognizable stellar groupings in the heavens.

During late June evenings, we can easily see one of the great celestial symbols of summertime. Look low toward the southern sky after dark, and you'll spot the long, curving arc of Scorpius, the scorpion.

You will easily notice the bright reddish-orange star Antares twinkling wildly as its light bounces through much more turbulent air low in the sky. Right now, the planets Mars and Saturn appear nearby, though they will change their positions over the next few months as they (and we) orbit the sun.

Antares marks the heart of this celestial arachnid, one of the most recognizable stellar groupings in the heavens. Several bright stars outline its claws at the top, a long curving stellar arc traces its tail, and at its very end, two stars even form its dreaded stinger.

Antares and Scorpius have a long and fascinating history. In about 3,000 B.C., Antares was considered one of the four "royal stars" of ancient Persia; some suggest it may have even represented the "lance star" referred to in the Biblical book of Job.

The Scorpion's image is one of the oldest of the Egyptian hieroglyphics, and it appears in inscriptions predating the third millennium B.C. This outline was not always interpreted as a scorpion, however. Ancient Chinese sky watchers viewed this star grouping as a major portion of the large and regal figure of the Azure Dragon, or Dragon of the East. And islanders of the South Pacific, who had never seen a scorpion, imagined it instead as a giant fishhook.

In Greek and Roman mythology, Scorpius represented the creature whose sting caused the death of the great hunter Orion, a prominent celestial symbol of winter. If you pay close attention, you'll notice that whenever you see Scorpius in the sky, Orion is nowhere to be found. This is because – so the story goes – when the gods placed these star groupings in the heavens, they separated the two figures to prevent them from stirring up trouble. Lillian White Spencer wrote about this wise move in her poem titled "Scorpio."

"One summer's south horizon, he

Antares is his old red heart.

And slew Orion with his sting

And since he did that horrid thing

If you have a dark sky, scan this region of the heavens with binoculars or a small telescope and you'll be astounded by all that you can see. For example, just to the west of Antares lies a fuzzy spot of light that astronomers know as M4. It's a great globular star cluster – one of the nearest in the sky, in fact, at a distance of some 7,200 light years from Earth.

Just above and to the east of the scorpion's stinger we find two beautiful open star clusters: M6 (the Butterfly Cluster) and M7 (Ptolemy's Cluster). These are just a few of the many "deep-sky objects" visible in this area.

What a marvelous region of celestial real estate we can see in our evening sky right now. If you do nothing else this summer, get out at night, lie on the cool grass and get acquainted with Scorpius.