Check Out the "Not So Super" Moon 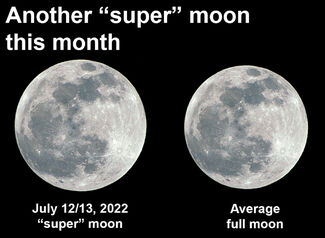 When a full moon occurs around perigee you will often hear it called a "super moon." At those times it appears only 7% larger than the average full moon – about the size difference between a 14-inch pizza and a 16-inch pizza.

Here we go again. Another month, and yet another "super moon"!

What's so super about the "super moon"? You may have already asked yourself this question after going out to see it and coming away thinking "Gee, it looks just like every other full moon I've ever seen."

Believe me, you're not alone! The reason is that the hype doesn't match the phenomenon. Let me explain with a more familiar analogy.

Imagine that you stopped at your favorite Italian restaurant and ordered a 14-inch pizza. Now suppose that they brought you a 16-inch pizza by mistake. Think you would spot the difference immediately? And if you did, would you call the larger one a "super" pizza?

I'm guessing the answer to both questions is no. That's because there's only a 7% difference in size between the two. And even if you did notice it would hardly be worth getting excited about.

So, what does all this have to do with the moon? Well, let's talk about the full moon that made its appearance on July 12/13.

Regular readers of this column already know that when the moon appears near the horizon it always seems to appear larger than normal. This is not real but is caused instead by an optical trick known as the "moon illusion."

Look at the moon again when it lies high overhead, and you'll see that it seems to have "shrunk." Of course, it hasn't; it's just that when it appears high in the sky there are no foreground terrestrial objects to fool our brains into creating the illusion, and the moon appears as a smaller (more normal) size.

At dusk, if you went out to check out the moon on July 12, you saw the full moon rising in the east, or at dawn on July 13, to see it setting in the west. At those times not only was the moon appear larger because of the moon illusion, it also appeared larger because it's closer to Earth.

This occurred because the moon doesn't orbit the Earth on a circular path, but instead moves along an ellipse that regularly carries it closer and farther during its monthly cycle.

Astronomers who accurately measure the moon's distance tell us that this is constantly changing. And when we saw the full moon setting in the west at dawn on July 13, it lied very near to its perigee (its nearest orbital point to the Earth), only about 221,994 miles away. That's 16,861 miles – only 7% closer – than its average distance.

This perigee, of course, occurs every month, but when a full moon occurs around perigee you will often hear it called a "super moon." At those times it appears only 7% larger than the average full moon – about the size difference between a 14-inch pizza and a 16-inch pizza.

So, what's so "super" about the "super moon"? Absolutely nothing, just the media once again trying to create a story where there is none, but that shouldn't stop you from getting out to enjoy the beautiful moonrise on Tuesday evening.

Maybe you'd even like to take a pizza along, just for fun!