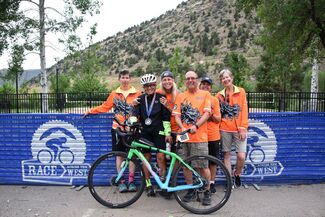 Dubbed as one of the toughest cycling races in the world, Race Across the West and Race Across America trekked through the country for another year.

The 3,037-mile Race Across America (RAAM) and its 928-mile counterpart, Race Across the West (RAW) is not for those inexperienced. With temperatures reaching triple digits in the desert to high climbs, this race requires not just a physical strategy, but a mental one too.

In this race, there are three major climbs, previously highlighted in previous issues of the Borrego Sun. Three major climbs (up the Pala Grade near Oceanside plus two in the Rocky Mountains) and one minor (across the Appalachians) encompass fully one-third of the RAAM course, ending in Annapolis, Maryland. Also, about three-quarters of the 928-mile RAM course involves climbs, ending in Durango, Colorado. The races can and are won or lost on those climbs.

In the solo female category, RAAM's overall champion of 2021 Leah Goldstein (Canada) competed in RAW for this year's race, and crossed the finish line first. Goldstein added another record to her name in the 50 – 59 category, shattering the previous average speed record of 11.78 mph set by Seana Hogan, having a speed of 12.9 mph. Goldstein also previously held the record for the fastest time for the under 50 women solo division. That record was beaten by Sarah Cooper in 2016.

A woman, who sets her goals high, Sylvia Maas, Borrego resident and endurance cyclist, finished second in the solo women's division in the Race Across the West (RAW), finishing in just over 77 hours, having taken two, one-hour sleep breaks, and a few 10-15-minute breaks, she averaged 12.09 mph for 928 miles.

Maas has raced RAW solo once before (and on a team twice). When she crossed the finish line in this year's race, she was happy to report she beat her old time by about 10 hours. Maas stated that she and her crew have learned a lot about time efficiency since then.

How did she get involved in ultra-cycling? Maas recalls her chance encounter with RAAM's 6-12-24 Hour World Time Trial Championships.

"I have a place in Borrego Springs, I ride there a lot. And in 2014, I just happened to be there the week of the 24-Hour Worlds and checked it out and thought, 'Hmm, that might be something that I'd want to do.' So first I did the 200-mile at the RAAM SoCal Challenge, and then I did the 24-Hour (she logged 348 miles) and some doubles entries, just trying to prepare for RAW."

Commenting about her win of the Texas Longhorn Challenge, ultra-cycling event last year, Sylvia claimed, "I felt the fact I could just endure more pain than the competitors, was a factor," additionally pointing out, "Women, are better at enduring pain, after all they give birth to babies."

Experience also pays off for the rides through the hot deserts of San Diego County and Arizona. "I live in Borrego, and train in the heat, which gives me something of an advantage." Her familiarity with coming down the infamous "Glass Elevator," as riders refer to as Montezuma grade, was also helpful. She was better prepared for the immediate temperature rise coming from the cooler ride from the Oceanside Pier before dropping into Borrego's six figure heat.

In 2019, she returned to RAW on the two-person squad, "Team In Our Prime" with Karin Weller. After Weller had to withdraw from the race at Camp Verde, Arizona, Maas warriored up and completed the next 428 miles solo.

In last year's race, she competed in the two-person (50-59) Mixed Category with cycling partner George Thomas. They finished the race in a time of two-days, 17-hours, 51-mins, three mph faster than the nearest RAW racing team.

She had also competed in the women's solo 50 – 59 in the 6-12-24 Hour World Time Trial Championships, held in Borrego Springs last October, where she won with 343.2 miles completed. It was her third solo finish, and she had competed four times as part of a team.

Oh, there goes Marko Baloh again, who won the overall solo category and came into the finish line not long after the RAW teams. Baloh is definitely no stranger to RAW and RAAM, as he has claimed previous RAW solo overall titles and one two-man record setting win. As for RAAM, the list goes on and on.

Scott Perry finished in second place in the solo men's category right behind him with an average speed of 12.09 mph for a total time of three days, four hours and 48 minutes.

Yusuke Ochiai (Japan) made his RAW rookie year a notable one, finishing in second overall in solo with an average speed of 14.61 mph. It was also his first time riding in the United States.

Fabio Silvestri (Brazil) followed right behind Ochiai. He is no stranger to RAW and RAAM, where he competed twice as a solo rider and once in an eight-person team.

Team Suicide Prevention One came in third place with a time of 14 hours and 46 minutes, arriving in Colorado at 5:50 a.m. (ET).

Next issue: More of the Race Across America race.