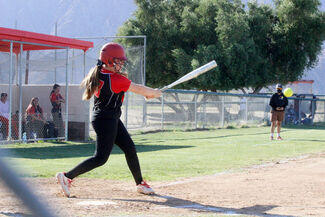 Senior pitcher Brianna Del Bono hits a three-run inside the park home run, as the Lady Rams take a 4 – 1 lead in the bottom of the first inning.

It was a run-filled day for the Borrego Springs softball team that even the strong winds could not stop them from bringing it in.

The Lady Rams continued their hot streak, as they faced the Julian Lady Eagles once again.

The two teams previously met up in Julian, where Borrego came out on top, 22 – 16 in three innings.

At home against Julian on April 19, despite a rocky defensive start for the Lady Rams in the first two innings, the hot bats of the offense sure made up for it.

After losing a 7 –1 lead heading into the top of the second, the Lady Rams bounced right back to seal the game and enacted the mercy rule, 25 – 11.

Sophomore Elena Sanchez was on the mound for the Lady Rams. After a walk and hit by pitch to get runners on base, Sanchez managed to strike out the next batter and induce a grounder to first.

The Lady Rams answered right back, tacking on the runs to support Sanchez on the mound.

Leadoff hitter senior Angelina Sanchez, at catcher for this game, got right into scoring position at third base. Taking advantage of the infields lack of attention and a wild pitch, she managed to tie the game 1 – 1.

Sophomore short stop Miriam Hernandez managed to work a walk and sophomore first baseman Mariana Torres hit a single to get on base.

Senior Brianna Del Bono, at left field, did what she does at the plate, and smacked one down the field, and managed to put the Lady Rams up 4 –1 with a three-run inside the park home run.

The rest of the lineup followed suit with consecutive hits.

Junior centerfielder Hannah Strate hit a sacrifice grounder down first base, enough for an RBI to add to the Lady Rams lead.

Elena Sanchez found herself in a jam, after loading the bases with consecutive walks and allowing a hit, as the Lady Eagles were able to bring in a few runs. With the Lady Rams lead cut to two, 7 – 5, a pitching change was made, and Del Bono was on the mound.

Del Bono had runners on base to deal with and found trouble at first finding her target, but managed to close out the inning with a strikeout. The Lady Eagles managed to take a 10 – 7 lead.

The Lady Rams, once again, connected nicely with the ball to retake the lead in the bottom of the second inning, a lead they never gave up again.

In the second, after hitting a single to begin the inning, Hernandez made her way to home to score on a wild pitch, 10 – 8. Del Bono had an RBI single to cut the deficit to one.

The Lady Rams then had a walking party to bring in a couple of runs, as well as the miscommunication of Julian helped the team extend the lead, 15 – 10.

Del Bono managed to have an easier third inning, only allowing one walk, striking out two, and induced a grounder to first.

The Lady Rams picked up right where they left off in the bottom of the third inning.

Elena Sanchez started off the inning with a single, followed by a walk by Fuentes. The duo was able to come home, 17 – 10.

With two on base, walks by junior right fielder Naylea Villareal and Angelina Sanchez, Hernandez managed to have a three-run home run of her own, as the Lady Rams extended their lead, 20 – 10. As the Lady Rams managed to hit the ball well and work a walk, they were able to add two, 22 – 10. And to not run up the score too much, the team forced themselves out to get the game going.

Del Bono once again found herself in some trouble, allowing a bases loaded walk, 22 – 11. However, she found the groove to strike out the following and forcing an out, preventing any more Julian runs.

The Lady Rams added three more in the fourth, and once again, forced themselves out, not wanting to run up the score too high.

The Lady Eagles could not get any more in the top of the fifth, and with the mercy rule in tact, game over.

The Lady Rams hope to continue with the hots bats, as they are back on the field in an away game against Julian once again in their first Manzanita League game of the season, April 28, 3:30 p.m. The team earned a forfeit win against West Shores, who they were set to face on April 21 at Salton City.

However, both teams will still face each other at home on May 3, first pitch set at 3:30 p.m.