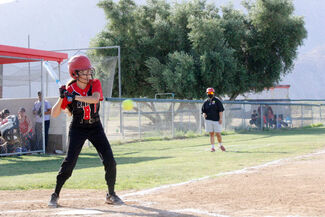 It only took three innings for the Borrego Springs softball team to earn its second win in Manzanita League play on May 3 against West Shores. It was a rough "walking party" for both teams, but the Lady Rams managed to make contact with the ball better.

The game against Julian was the Lady Rams last home game of the regular season, as well as senior day. Coverage for that game will be in the May 26 issue.

Against the Lady Wildcats of West Shores, sophomore Elena Sanchez got the nod for the start on the mound.

Elena Sanchez did well, managing to hit the spots on the plate, however, the Lady Wildcats still worked walks against her.

Getting out of the inning, the Lady Rams were down, 4 –0.

Senior centerfielder Angelina Sanchez got the Lady Rams going in the bottom of the first inning with an inside of the park home run, 4 –1.

The Lady Rams also managed to work walks and steal home on miscues, and were able to tie the game 4 – 4, before anyone knew it, took the lead, 7 – 4.

Back to the top of the lineup, still in the first inning, Sanchez once again with the hot bat, brought in two runs with a single, 9 – 4.

Up 13 – 4, Elena Sanchez had a comfortable lead to work with in the top of the second inning.

With the Lady Wildcats being patient at the plate and not swinging as often, walks were given up, but with a runner out at first, and a strikeout looking, there were two outs in the top of the second inning, only one run scoring so far. However, the Lady Wildcats managed to find weak spots, and were right back into the game.

Following the strikeout, there were back-to-back RBI singles, followed by walks, and the Lady Rams deficit was cut, 13 –10.

A pitching and catching change was made, and Del Bono was on the mound with Angelina Sanchez behind the plate. Their counterparts moved in their places, respectively.

A run scored after a walk, but Del Bono managed to strikeout the next, getting the Lady Rams out of a jam of an inning, only up two, 13 –11.

The Lady Rams did not let that get to their heads, and they did what they did best at the plate. Patience and connect with the ball.

Junior second baseman Shantell Fuentes worked a walk to begin the bottom of the second inning. Then junior left fielder Hannah Strate got on base with a double. Angelina Sanchez worked the walk to load the bases.

The Lady Wildcats pitcher got a strikeout, but then walked the next batter, 14 – 11.

Del Bono then connected with the ball for a two-RBI double, extending the Lady Rams lead.

It was then walk after walk, as the Lady Rams continued to push their lead to 21 – 11.

Del Bono then closed the top of the third inning. First a strikeout looking, but then hit the next batter. However, the next two she faced, she struck them out looking as well, to end the game.

In agreement, the Lady Rams and Lady Wildcats ended the game in three, instead of five.

As the season winds down, if the Lady Rams can continue to hit the ball well and are patient at the plate, they can close out the 2021 – 22 season strong and make an appearance in the postseason.

The Lady Rams will face West Shores once again in their final game of the regular season in an away game, May 12, 3: 15 p.m.