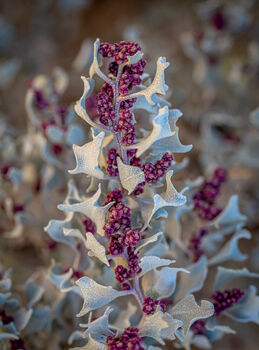 Christmas snow might be rare here, but the arid sands of Anza-Borrego offer holiday cheer none-the-less in the form of a desert shrub with toothed leaves and tiny reddish fruit that resembles European holly.

While unrelated to traditional holly, desert holly is a native to the Southwest and found in many parts of our local desert. This is a plant that is highly tolerant to Drought, surviving in some of the hottest and most arid places such as Death Valley.

The three to four-foot desert holly is covered with silvery-whitish-gray, many-pointed leaves and is a species of saltbush that grows in highly alkaline soil. Most desert plants can only survive in an alkaline environment of no more than one to five parts per million, while desert holly can thrive at up to 30 parts per million.

This is accomplished through adaptation that allows the leaves to accumulate the salts and that helps extract water. Within the leaves there are tiny bladders that keep damaging salt deposits away from plant cells.

In the hottest and driest periods, the salt is shed when the plant drops its leaves.

In Anza-Borrego, desert holly is more often found in the most arid parts of the park such as the Borrego and Carrizo Badlands.

Native plant nurseries do sell desert holly as an attractive garden shrub that attracts a variety of bird, butterfly, and moth species.