Rams Face Off Against Desert Mirage 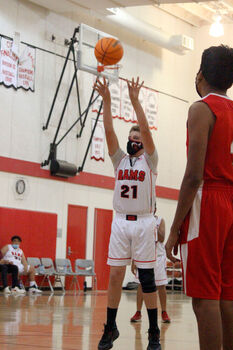 The Rams of Desert Mirage came out aggressive and fast against the Rams of Borrego Springs. In that battle, Desert Mirage spoiled the Borrego varsity boys' basketball teams home opener, 67 – 5, on Nov. 15.

Borrego's roster may be a bit trimmed this year compared to previous seasons, and very young, as three seniors did not return for their senior year. However, this team has a lot of potential, and despite the loss, still has things to learn and look forward to.

Borrego hoped to bounce back in two away games against Bonsall and Mountain Empire, but were on the short end of the stick as they dropped those games. Like the girls varsity team, they will travel to Desert Mirage as they hope for a different outcome on Dec. 1, and return home to face Mountain Empire once again.