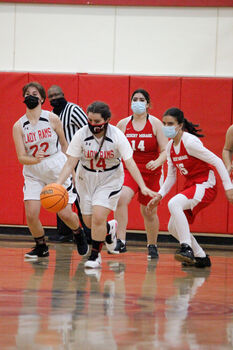 The Borrego Springs Girls Basketball team opened up the 2021 season at home against Desert Mirage on Nov. 15.

Despite a fairly low scoring game, it did not take away the hustle the girls had on the court. The Lady Rams fell, 24 – 2, with the only points coming from junior power forward Alessandra Reyes in the fourth quarter.

The Lady Rams bounced back and earned their first win of the season in an away game on Nov. 19 against Mountain Empire.

This game was also low scoring, as both teams only scored once in the first quarter.

The Lady Rams are back on the road on Dec. 1, and have a chance to avenge their loss, as they face Desert Mirage again.

They are back at home on Dec. 3, hoping to earn another win against Mountain Empire. The game is scheduled for 3:30 p.m.