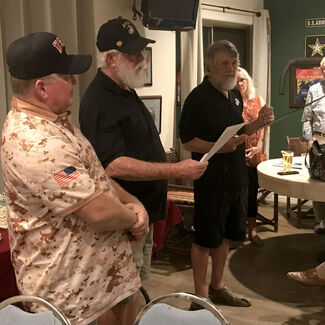 That was part of the message on Nov. 10 by General David Berger, Commandant of the U.S. Marine Corps, challenging Marines to "adapt to the demands of the present and the future, while learning the hard lessons from our recent past," and further that Marines in the future who fight the good fight "will be forged of the same courage, spirit, and war fighting excellence as all Marines before them."

Such was the atmosphere at American Legion Post 853, where Borregan Marine vets and their friends and families gathered for the celebration. It was highlighted by cutting the birthday cake using a ceremonial Katana sword, in remembrance of the sword surrendered by the Japanese aboard the USS Missouri in August 1945 to signal the end of World War II.

Honored with the first slices of cake were the oldest and youngest Marine vets: Don Shindler (95) who joined up in 1944, and Geoff Heard (35) who joined up in 2004. Their separation by 60 years in age and enlistment date are purely coincidental.

Burgers and delicious potato salad, plus beer and mixed drinks, were also on the menu for the evening feat, where there were close to 100 attendees.