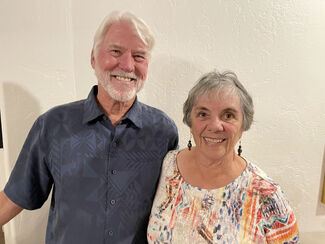 After building the 20-home community – Desert Shadows – in De Anza Golf Club, in 1992, Anne and Jim Wermers of San Diego, decided to become residents of Borrego Springs, and began fulfilling a vision of resurrecting a town that had outlived its golden years.

The Wermers were recently named by the Chamber of Commerce to replace former Mayor Andy Macuga, as Co-Honorary Mayors of Borrego Springs.

"When discussing a new Honorary Mayor the name or names that repeatedly came up were Jim and Anne Wermers," Françoise Rhodes, Executive Director of the Chamber of Commerce, said.

"So by a unanimous vote from the Borrego Springs Chamber Board of Directors, the Wermers were selected and when asked, they accepted. With the love and business acumen the Wermers have for Borrego Springs, the community can rest assured they will follow in the footsteps of past Honorary Mayors and represent our wonderful area well."

For the next two years, the couple will be presiding over public events, and, as Anne remarked, "protecting the character of the town."

"I know my job – making sure there are no traffic lights in Borrego."

The honor reflects the work of the dynamic duo, who have made significant commercial and philanthropic contributions toward the Town's restoration.

"We are always inspired by the number of talented people in Borrego. It's community cooperation that gets things done. So many people, who live here, are so willing to chip in both financially and share their skills.

"This is what makes the community resilient, viable, and self-reliant in so many ways,'' explained Jim Wermers. "Borrego really has no other choice, but to rely on the generosity of residents and seasonal home-owners to supplement its resources. Thank goodness small town values of responsibility for our neighbors are alive and well in our community." He added, "Plus, there are immediate rewards. Even the smallest contribution has a big impact in such a small, interdependent community."

"You know, when we first came to Borrego, I thought, 'Look at all these elderly people. They look so healthy, bright and happy. We must have found the Fountain of Youth."

While the people seemed fit, many buildings in the downtown area had seen better days. The Wermers chose the old Mercantile Building as their first project, and found in the boarded and dilapidated building a spirit of renewal and a vision of new life for the town.

Designed in 1948, the once derelict building now proudly houses the Art Institute, and Kesling's Kitchen, named after the original architect.

According to Jim, the Kesling Building, designed by mid-century modern architect William Kesling, situated across from Christmas Circle on the South side of Palm Canyon Drive, had been the first commercial enterprise in town. The building was in bad shape when the Wermers first decided to invest in its resurrection. Anne described the condition of the building when they first saw it.

"It was a mess, windows and doors were boarded up; it was filled with rat and pigeon droppings; there was a dirt floor in the rear, and the place smelled terrible."

Among the many evolutions of this first commercial complex from a diverse group of shops and businesses – a prototype for the modern mall – to eventually, being taken over by Woods Grocery Store, and a butcher shop, which had left the building still reeking with the odors of the butcher's grisly work.

"We had a stroke of luck when we found Kesling's original plans and design," explained Jim, adding, "We had already started work on the renovation, but stopped, and changed the construction plans to follow Kesling's vision as much as possible." Jim credits local architect Richard Orne for the seamless merging of the past and the present.

The Wermers donated the building to the Borrego Springs Art Guild, and turned the Palm Canyon Drive street entrance into a modern eatery – Kesling's Kitchen, which opened in 2016. There have been a number of additions to the site, including the Community Gardens and Education Center, a thriving enterprise where individuals can rent a plot of land, complete with raised beds, mulch, seeds, and water, and share the thrill of growing their own fresh foods, alongside their neighbors. The Borrego Springs Unified School District also uses the gardens to teach kids about where food comes from and healthy eating habits.

The Co-Honorary Mayors have new plans for a large building on a lot behind the Art Institute, which will house the Pottery Center for learning about and doing pottery, modern agriculture and aquaponics. It's been ready to break ground for 22 months, awaiting final approval by County planners.

Then, there were trees. Founder and active member of the Borrego Village Association (BVA), Jim Wermers participated in a fundraising drive to plant arbors of trees along the sidewalks on the south side of Palm Canyon Dr. The drive paid off with flourishing green trees, and benches that, not only connected the commercial sites, but provided much needed shade and aesthetic value.

Next came The Mall and The Center, two mixed commercial complexes, in dire need of TLC. The Wermers were approached by the previous owners, who had lost interest in Borrego, to buy The Mall in 2014. The duo followed up with the purchase of The Center, across the street on Palm Canyon Drive in 2016.

According to Jim, they spent more on upgrading than the purchase price. But it was the new ADA accesses, fresh landscaping, renovated parking areas, sewers, and public spaces, including rest rooms, that attracted new shop owners to lease space and locals to test their hands at owning a business.

"It really wasn't that difficult renting the spaces after the improvements were made. What excites me the most is that locals, people and families that live in Borrego, are opening businesses for the first time," noted Jim Wermers. "Kendall's Cafe and Calico's were recently bought by locals. Witnessing the town growing our own businesses is pretty special."

Working with BSPAC, and the performing arts community, in The Center, the Wermers added ADA access, renovated public restrooms and upgraded exterior space.

"The Performing Arts Center is a gem. With its new lights and other improvements, it's going to be even more enjoyable for the audience and the entertainers alike," noted Anne, who is playing a part as a member of a chorus in an upcoming show.

Their philanthropy and commitment to the community doesn't stop at re-building the downtown, the Wermers joined Tom and Jeanne Fredricks in opening a food bank in April 2020. When it became apparent the COVID-19 pandemic wasn't going away, and food banks at Saint Barnabas and Saint Richards were often overwhelmed, the two families opened the former library space in The Mall for food deliveries every Thursday afternoon.

The Food Bank is still operating. A few things have changed, but one thing has remained the same, even grown families, who must rely on the generosity of others to put food on their tables. The Food Bank has merged with the Borrego School District food service, and is now open on Tuesday afternoons. Also, the food supplies are no longer boxed in advance, but laid out buffet style so families can choose what they need.

"It didn't make a lot of sense to provide the same box filled with the same amount of food to feed two people versus a family of eight. Many of the volunteers have expressed that they miss the camaraderie they shared preparing the boxes of food," Anne pointed out, noting that, "There are special bonds created among people, working together in the service of others."

Jim and others still personally shop for the extra foods preferred by the community, adding to the meals provided by the San Diego Food Bank. The food crisis continues. Last Tuesday, the food bank fed 175 families. Another benefit at the Food Bank is a once a month visit by bilingual attorney Felipe Hueso, who comes from San Diego to provide free legal services. Teresina Hueso and Janmari Hueso, who manage the law office in San Diego, also come and provide help.

"This has become a really big deal. Last week, 12 people were waiting in line to speak with the Hueso's," Jim revealed.

Then there's the new public space – the transformation of the former library through donations of couches, chairs and tables. The idea behind the Community Resource Center is to utilize the large space, which except on food bank days, is empty by encouraging educational presentations by local residents to help and inform the community.

Anne Wermers has a Master's Degree in counseling emotionally disturbed adolescents, and provided career counseling to women returning to school at Grossmont College, in San Diego. Then in a complete reversal of interests, she earned her commercial real estate brokers license and began a successful career selling investment real estate.

Jim Wermers has a degree in Philosophy, practiced carpentry to pay off his student loans and traveled around the world for two years before settling into a career in construction.