The Ringed Planet at its Finest! 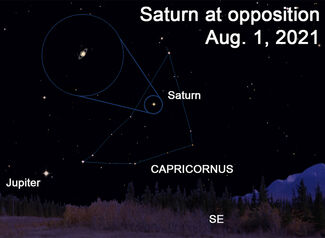 Saturn can be seen low in the southeastern sky throughout the rest of summer.

The man who flew a kite in a lightning storm so that we might one day have electricity and penned such poignant words as "in this world nothing can be said to be certain except death and taxes," the great 18th century philosopher, statesman and scientist Benjamin Franklin, also had a profound interest in astronomy.

Not only was he the widely read author of "Poor Richard's Almanack," he also philosophized about the possible existence of life elsewhere in the universe, and he even charted the path of the planet Mercury during one of its rare transits across the face of the sun.

I wouldn't be surprised if Mr. Franklin peered with a telescope at the heavens from time to time from the streets of Philadelphia, which had no light pollution back then, and perhaps he even marveled at the glorious ringed planet Saturn. I wonder if he ever shared that planetary view with any first-time telescope viewers.

This month, you too, can get a great view of Saturn. It appears now at its best, reaching its official opposition point on Aug. 1. That means not only is the ringed planet at its nearest and brightest, but it also rises around sunset so that it remains visible to planet watchers all night long.

As the sky darkens this week, look for Saturn low in the southeastern sky, and not far to its lower right lies the brighter planet Jupiter; it will reach its opposition point on the Aug. 19.

Saturn will remain in our evening sky throughout the summer, but this month, you can expect a small telescope to present it as a truly spectacular sight. If you've got one, this is definitely the time to aim it toward the ringed world. Not only is Saturn about as close to the Earth as it can get (around 831 million miles), but its rings are tipped beautifully in our direction.

If you've never viewed this planet for yourself, you have no idea what a stunning view you're missing. Even a small instrument with a magnifying power of only 30x or so will show its rings; of course, a larger telescope with a higher magnification will show not only the rings but also the larger separation between them known as the Cassini Division and even some cloud bands in its atmosphere. Additionally, Saturn's largest and brightest moon Titan appears with even the smallest of instruments.

What intrigues me most about Saturn is how people react when seeing it for the first time through a telescope. I can always count on an initial gasp of amazement, often followed by a joking accusation that I slipped in a photographic slide to trick them.

Maybe now you can understand my curiosity about whether Franklin ever shared his view of Saturn with any first-time telescope viewers. If he had, I'd wager that he would have heard people gasp even more excitedly than they do today. And I suspect that being the wise man that he was, Franklin might have written his now-famous quotation just a bit differently:

"...in this world nothing can be said to be certain except death, taxes and the reaction of stargazers to the amazing ringed planet."