The Perseids Are Coming! 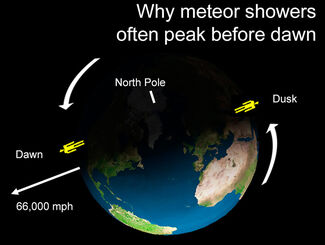 For one thing, I can finally see an end to the searing desert heat where I live. For another, the Milky Way appears stunning in the night sky.

But my favorite reason for enjoying August is that I get to write a word that I can use only once a year.

This word comes up every year around this time because this is when we're approaching the annual Perseid meteor shower. You see, it was the ancient Chinese sky watchers who first documented this meteor shower in 36 A.D. and wrote that "more than one hundred meteors flew thither in the morning." They used a corresponding word in Chinese, but you get the idea.

The New Lexicon Webster's Dictionary of the English Language defines the word "thither" as an adverb that means "to or toward that place." And I suspect that the "place" to which they referred was the shower's "radiant" – the region of the sky from which all shower meteors appear to originate.

The Perseid shower occurs when the Earth slams into the dusty debris expelled by Comet Swift-Tuttle. As this cometary litter falls into our upper atmosphere it is incinerated and produces the phenomena we know as meteors. Most are specks no larger than a grain of sand and are extinguished at heights of 50 miles or higher.

Stand outside during any meteor shower and you'll see meteors (also called falling or shooting stars) all over the sky, but if you trace their paths backward, you'll discover that they all appear to come from one location in the sky. This is called the shower's "radiant" and is often named for the constellation in which it lies. And that's why this month's shower is known as the Perseids; its radiant lies in the constellation of Perseus. Any meteor that appears to come from elsewhere are called "sporadic" meteors and are flecks of dust not part of the Swift-Tuttle swarm.

This year's peak occurs during the early morning hours of Thursday, Aug. 12. Typically, we spot most meteors before dawn. This isn't a conspiracy to prevent evening stargazers from enjoying the show; it occurs because only during those hours do we face the direction of our planet's motion, which means we can watch as we sweep up meteoric particles. During its peak hours, stargazers under a dark rural sky should be able to count as many as one or two every minute – all appearing to come from the general direction of the constellation Perseus in the northeast.

For the best view, many people camp in the mountains or country or set up on rural roads away from traffic. The best tools to observe the shower are just our eyes, but binoculars might be helpful to check out long smoke trails left behind by any rare exploding fireballs. Be sure to take a lawn chair or sleeping bag, a blanket or hot chocolate to keep warm and gaze up toward the northern and northeastern sky.

It will certainly be an enjoyable time under the stars, but don't expect to hear someone utter the word "thither." Unless, of course, I happen to be nearby!