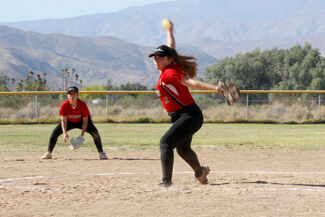 The Lady Rams softball team was back in action for the 2021 season, despite it being a short one due to COVID-19.

The team is on a hot start, so far winning all their games by mercy rule.

The Lady Rams opened the season with an away game against the San Pasqual Dragons, and won 18 – 8.

They were back for their first game at home since April 2020 against the Hamilton Bobcats.

The Lady Bobcats were the last and only team the Lady Rams faced in the 2019 – 20 season before COVID-19 restrictions were in place.

After being down early in the game, 3 – 0, the Lady Rams turned up the heat and took advantage of the third string pitcher on the mound. The Lady Rams put up a show, and eventually, a 15-run rule was intact in the top of the fourth inning, and the game was called, 28 – 6, in favor of the Lady Rams.

The two teams faced off again, this time in Anza on the Lady Bobcats home turf, on May 12, which took place after print.

On May 7, the Lady Rams faced the San Pasqual Dragons once again, and picked up right where they left off.

The Lady Rams shut out the Lady Dragons, 17 – 0, in just four innings.

With a solid start on the mound, the Lady Rams gave junior Brianna Del Bono a nice cushion to work off of, as they scored 11 runs in the first inning, nearly going through the lineup twice.

Del Bono, who has been such a stellar ace on the mound for the Lady Bobcats in the last couple of seasons, did what she does best. With the help of her friends in the infield, the Lady Dragons had no chance of getting past third base.

Del Bono cruised through the first, despite a slight mishap to rob her from a 1-2-3 inning.

Junior centerfielder Angelina Sanchez was the first base runner for the Lady Rams, after being hit by a pitch. A quick strikeout followed then it was a walking party.

Del Bono, senior shortstop Marla Manzano, and junior catcher Natalia Carmona, and senior third baseman Daniela Carmona led the walks. And the Lady Rams proved to be swift on the bag, and continuously stole bases, including home, and the runs kept pouring in, 11 – 0. Free bases, why not?

Del Bono went back on the mound with an 11 – 0 lead, and struck out the batters in order 1-2-3 in the top of the second and third inning.

The Lady Dragons managed to hold the Lady Rams to no runs in the second inning.

To enact the 15-run rule, the Lady Rams once again added to their lead with a good eye at the plate, and were careful not to swing at the wild pitches by a new pitcher for the Lady Dragons.

In the top of the fourth inning, the Lady Dragons third baseman hit a liner down center field for their first hit of the game since the first inning. But that's all they would get as Del Bono got a batter with a strikeout, and the infield did its job. Game over, win streak 3 – 0.