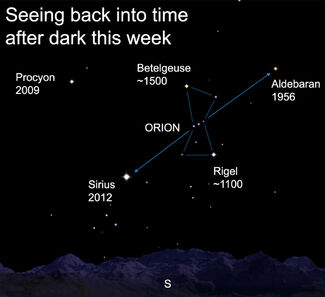 If you look at the star Sirius tonight, you're seeing it as it was in June 2012.

It's been said that most of our knowledge of the universe comes to us in the form of light. But just what is light?

Well, that's a question that scientists have pondered for ages, and the answer seems quite peculiar. We now know that light is a vibrating electromagnetic field, but it can behave as both a wave and a stream of particles called photons. Pretty strange stuff!

Back in the 16th century, scientists didn't know this, nor did they know if light actually traveled through space or if it just existed "there" and "here" at the same time. It was the Danish scientist Ole Romer who, while observing eclipses of Jupiter's moon Io, measured the speed of light at a stunning 136,702 miles per second. We've since learned that its speed is even greater: 186,272 miles per second!

Hard to grasp, isn't it? You might try a demonstration that I frequently use with my stargazing guests.

Aim a flashlight toward the bright star Sirius, low in the southeastern sky after dark this week, and turn it on for just one second. By the time you flip the switch off, the photons of light you've created are already 186,272 miles away and still racing outward at the speed of light. (This is in principle only, of course, since your flashlight beam isn't powerful enough to escape the Earth's thick atmosphere, but stick with me on the concept anyway).

So when would your light beam arrive at Sirius? Well, this star lies about 50.6 trillion miles from us, and light requires 8.6 years to travel that distance, so it will arrive there around September 2029. We say that Sirius is 8.6 light-years away. The same is true in the opposite direction as well. The photons emitted by Sirius have journeyed across space for 8.6 years before hitting your eyes, so tonight, you're seeing Sirius as it was in June 2012. In other words, you're looking nearly nine years back in time!

As amazing as this sounds, Sirius is one of the nearest stars we can see. Above and to its right lies the constellation Orion, where the light from reddish-orange Betelgeuse has been traveling through space for about 500 years, and that of Rigel – on the opposite corner of Orion – has left that star around the year 1100. Just imagine all the history that has occurred on our planet while their photons were journeying toward your eyes!

Upon realizing this, you might begin to wonder if these stars even exist anymore. After all, if they had disappeared, we wouldn't know about it until we see their light go out.

Don't lose sleep over this one; I can assure you that the stars you see tonight are still there. That's because most require billions of years to burn their nuclear fuel, and a relatively short period, like tens or hundreds of years, to a star would be equivalent to only seconds or minutes to a human.

If this concept intrigues you as it does me, I hope you'll head outdoors for some stargazing on the next clear night and enjoy a remarkable cosmic journey through history!