Mooning Around on Winter Nights 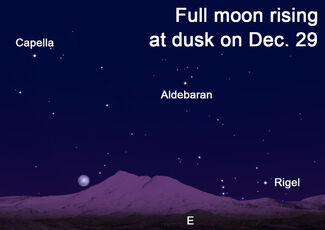 The final full moon of 2020 arrived on Dec. 29, when it rose majestically over the northeastern horizon shortly after sunset.

We astronomers usually schedule our observing programs for times when the sky isn't obscured by such bright moonlight.

Whenever I'm invited somewhere and must decline because of the moon's phase – well, the looks I receive are priceless. With our crisp winter nights and brilliant stars, it might be fun to gaze at the moon with some interesting new knowledge about our nearest cosmic neighbor. So, here goes.

Our moon lies at an average distance of 238,855 miles from Earth, but because the moon orbits our planet not in a circular path but along an ellipse, its distance changes. When at its closest (perigee), it can lie about 225,623 miles away. At its farthest (apogee), it is about 252,088 miles away.

How long would it take for us to travel this distance? That, of course, depends on the speed at which we travel. For example, driving at an average speed of 60 miles per hour – assuming there was a road heading in that direction and that our cars could operate in the vacuum of space – we would need half a year of travel, while the Apollo astronauts of the 1960s and 1970s needed only three days to reach the moon in a spacecraft. Light, on the other hand, travels at about 671 million miles per hour (186,282 miles per second) and takes little more than a second to make the journey.

Suppose we could stand on the moon. Since it is much less massive than our world, its gravitational pull is significantly less as well – one-sixth of what we normally feel. That means that someone who weighs 120 pounds on the Earth would weigh only 20 pounds on the moon.

The weaker lunar gravity would affect most of what we've grown accustomed to here. Just imagine watching a lunar baseball game, for example, where a towering home-run ball would sail for miles before finally landing!

Temperatures on our natural satellite are also quite different than here on Earth. Since the moon has no significant atmosphere to absorb the sun's heat and distribute it around the lunar globe, temperature extremes are common. A thermometer in direct sunlight would register about 273 degrees Fahrenheit, while one in the darkness would record a blistering minus 244 degrees F.

The visible features of the moon are also quite interesting. The large, dark regions are ancient plains of solidified magma known as mare, and they always appear to face us here on Earth. Does that mean that the moon doesn't rotate?

Not at all. The moon rotates, but the Earth's relatively strong gravitation has locked one face in our direction. It's much like tying a rope to a bucket handle and swinging it around you. The open part of the bucket always faces you, even though other people would see all parts of the bucket as it sails around your head.

It's always fun to ponder these amazing facts while spending time with our nearest celestial neighbor.