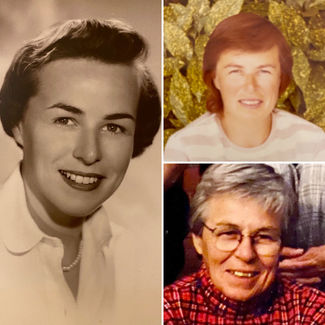 Muriel Ann (Ryder) Streit was born November 26, 1933 in Greenport, New York, and died on June 17, 2020, at the Veteran's Home in Chula Vista, California. "Mert" was a proud native of Shelter Island, New York, a small island between the forks of eastern Long Island that is only accessible by ferry boat. She spoke fondly of childhood summers spent roaming the woods building forts and picking berries, fishing and scalloping with her dad, or working as the only 12-year old female caddy at the public 9-hole golf course. Winters meant sledding the hills at the golf course or skating on the freshwater ponds with clamp-on skates.

Mert graduated from Shelter Island High School in 1951 and left the island to attend a residential nursing program at New Rochelle Hospital School. She was the winner of a $50.00 award for "Best All-Around Nurse" upon graduating with her nursing degree in 1954.

After a brief stint at a children's tuberculosis hospital in Westchester County, she joined the United States Air Force and was commissioned as a 2nd Lieutenant. It was at an Air Force base in Big Spring, Texas that she gained the moniker she would be known by for the rest of her life – "Mickey". That's also where she met James Streit, an Air Force pilot who she would marry in 1958. Jim and Mickey eventually moved to San Diego where Mickey continued her nursing career and began raising her four children.

In 1977, the Streit family moved to Borrego Springs. Mickey became a prominent and beloved member of the Borrego community, to include serving two terms on the School District's Board of Trustees where she may have been the lone survivor of a recall effort in the early 1980s. She was a fixture at local sporting events, musical performances, and potluck banquets, and she even occasionally calling upon her nursing skills to assist with high school sports physicals.

Mickey offered encouragement or counsel in equal measure to any kid in Borrego that needed it. She was smart, warm, pragmatic, and never took herself too seriously. She was a voracious reader, loved jigsaw puzzles and music, and was a pretty terrible cook. She also loved to tinker, and as a child of the Great Depression and World War II, she could fix almost anything or make something useful out of a collection of random items. These traits came in handy when she went to work for Borrego Hardware (in the old post office building) or behind the counter at the Village Liquor & Pharmacy.