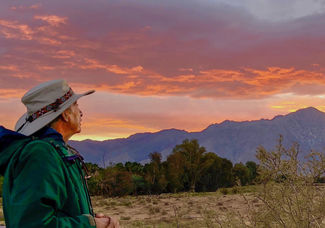 The annual Borrego Springs Hawkwatch ended for the season on April 12 with a tally well below seasonal averages and compounded by challenges because of the Coronavirus.

The annual spring event is a citizen-science project devoted to monitoring the migration of Swainson's hawks as they pass through Borrego Valley every spring on their long migratory journey from southern South America to as far north as the Arctic Circle.

Hawkwatch leader Hal Cohen said the official tally was 2,001 recorded during 116 hours of observation over 51 days. The seasonal average over the past 18 years that the count has occurred has been 4,300 hawks, with the highest number in 2017 when nearly 12,000 were recorded.

Cohen said available food is an important factor in determining the numbers of birds that show up. High counts have generally occurred in years when there has been a good wildflower crop, along with the large, green caterpillars that provide a high protein source of food. This year, the spring bloom was at best average, and therefore the hawk food supply was greatly reduced.

Concerns about the Coronavirus added additional challenges for volunteers who had to maintain separation while conducting the daily census.

"During the season we adhered to the guidelines of social distancing," Cohen said.

Instead of groups of counters clustered at one spot, often there was only one counter, or perhaps a few scattered at appropriate distances.

Despite this year's meager migration total, Cohen said there were four days when high bird numbers made observations spectacular.

On those four dates in March, as many as 581 hawks were counted on a single day.

On that day, Cohen said the birds all gathered in what is known as a kettle.

"The massive kettle was quite visible from the count site," Cohen said.

Kettles form when the hawks launch in the morning to continue their migratory journey north. As air currents begin to rise from the warming surface of the desert, the birds simply push off from their roosts and lift on the rising air. This is done to conserve energy.

As the launch continues, the hawks begin circling and rising until they can catch a current moving in a northerly direction. It is one of the most impressive sights of the migratory season.

Volunteers spend a few hours in the field each evening to record where birds appear to be landing for the night. This allows observers in the morning to know where to look to record numbers as birds launch.

Borrego Valley Hawkwatch became an important annual event after it was discovered the valley is on the migratory route of the hawks. Cohen predicted that numbers would be down this year because winter rains were not sufficient to produce a bumper crop of wildflowers.

But he did expect things to be "average" with around 5,000 birds counted. Data from other migratory sites will have to be analyzed to see if birds simply moved to other routes.

The count is sponsored by the Anza-Borrego Desert Natural History Association and Cohen said there are plans to post an information board at the Association office to provide the latest information about Hawkwatch and the status of migration.