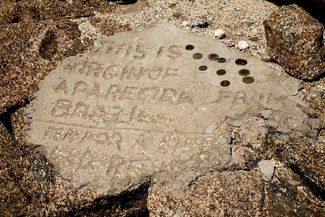 Author Paulo Coelho is likely best known for his book, "The Alchemist," but a lesser known work has deep roots right here in Borrego Springs and perhaps offers a mystery about a shrine to the Virgin of Aparecida hidden in the weathered rocks of a remote desert canyon.

Coelho also penned "The Valkyries," a fascinating book about his spiritual search during a 40-day journey into the desert to speak with his guardian angel.

He claims to have traveled from his native Brazil to Borrego Springs in 1988 on his spiritual quest.

The book is deep and intense and will likely seep into the mystical recesses of each reader's mind in far different ways depending on your views, background and experiences.

Some have found "The Valkyries" to be hard to believe as a non-fiction autobiographical work, but more accurately reflecting the fantasy for which Coelho is best known in his writings.

But his descriptions of Borrego seem accurate and lend credibility to the reality of his experience.

He describes his travel from Brazil to Los Angeles and then the drive to Borrego and his first view of the desert, likely from the crest of Montezuma Grade where the vast desert extends from horizon to horizon.

Coelho describes arriving in Borrego and standing in the middle of the main park, perhaps Christmas Circle.

"You can see were the town of Borrego springs begins and where it ends. But there are three hotels for the winter tourists who come there for the sun," he wrote.

On his first night he and his wife dined at a Mexican Restaurant and later hiked off into the desert "to get the feel of it."

"There in the desert the heavens were clear. They sat on the ground and made their separate wishes on the falling stars. There was no moon and the constellations stood out brilliantly," he wrote.

Over the next 40 days his quest took him and his wife into the desert for spiritual encounters, self-discovery and reflection. You'll have to read the book for those fascinating details.

If you are like me, you will read the book several times and with each reading come away with deeper understanding or perhaps even conflicting understanding of what Coelho was trying to say.

In the end, Coelho sees his angel and to mark the spot returns to build the shrine.

He drove to the canyon with his wife and a friend named Gene, "a young man who lived in a trailer out in the desert."

Coelho mixes the cement on a plastic sheet and then climbs to the top of a boulder and "embeds an image of Our Lady that he carried with him."

"In this place, the energy of the soul of the world was felt, and it will be felt here forever. It is a place of power," Coelho quoted Gene as saying.

Gene was the one who told Coelho about the Valkyries and that they could help him find his angel during his 40-day experience.

A few years ago, while wandering as I often do in the desert, I found the shrine. The clay statue of the Virgin of Aparecida is gone. This is the traditional title of the Blessed Virgin Mary.

There were foreign coins scattered on the rough concrete slab and crudely written in the concrete was, "this is Virgin of Aparecida from Brazil."

In an epilogue at the end of his book, Coelho further talks about receiving a letter from a Brazilian fan living in Los Angeles and on a whim, he asked if she might travel to Borrego to see if the statue was still there.

"After I mailed the letter, I thought to myself: That's pretty silly," he wrote.

To his surprise she wrote back sometime later that she found the canyon he described and eventually located the shrine.

"We saw some small candles burning, some golden cloth with a butterfly woven into it and a straw basket that had been thrown aside," she wrote. The statue was no longer there.

There are other facets to this mystery, but I'll leave it to you to figure them out.

Where is the shrine?

It wouldn't be a good mystery if I gave you all the secrets. Read the book.

Maybe your journey of discovery will be filled with self-awakening. That happens a lot in the desert.