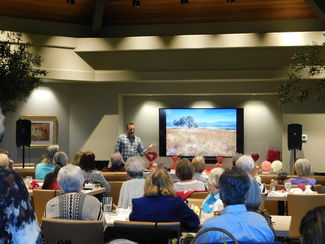 The most recent Art Guild Luncheon was held at Rams Hill Restaurant, with special guest speaker Garett Wood on Feb. 13.

Every seat in the room was filled, and when Wood started to speak, the room fell silent and listened intently.

Wood's presentation followed his career as a photographer. Interestingly, Wood says he did not study photography in college save for a couple of classes. In fact, in his first career, he was a CPA. It wasn't until he came to Borrego Springs that he began to take interest in his own photography again.

Wood has been visiting Borrego for about five years, and noted that it was his trips to Borrego that served as the "catalyst" that reignited his passion for taking photos.

The photographer took time to explain how changing camera technology has made taking photos a little easier than it used to be. For one thing, instead of being limited to space on a roll of film, now it is possible to have 10,000 photos on one memory card. The more photos you take, the likelier you are to have a few good shots.

Another benefit of shooting photos with a digital camera is that there is the "benefit of silence," meaning that any sounds the camera makes, like the shutter sound, can be turned off. This makes it easier to shoot pictures without disrupting the flow of the situation. Auto focus, a feature some might already be aware of, has also made significant advances. Wood explained that digital cameras are essentially computers. The example he gave to illustrate that point was that it is possible to program a camera to always focus on a certain person's face, like the bride at a wedding.

If you're wondering if Wood has any advice on taking good photos, or which camera to purchase, you're in luck. His advice is less about the camera, and "more about getting out there and doing it." A good photo can come from any camera. Wood even suggested purchasing used equipment to practice with.

Near the end of his presentation, Wood noted that as he looks back through his work from previous years, his photographs have improved with time and experience. Wood says to all hopeful photographers who are interested in honing their skills, to "keep at it" and to "seek feedback." Learning how a camera works can be time consuming and potentially frustrating, but it is worth the work.

If you have not seen Garett Wood's photography at the Art Institute, or in some of the restaurants around Borrego, his work can be viewed on his website, http://www.garettwood.com.