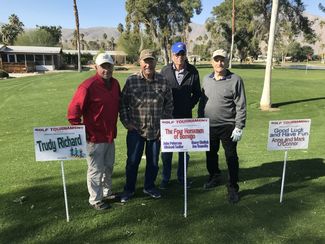 It was a great day for golf and other fundraising activities that raised a record $24,0000 benefiting the Senior Citizens Center.

A wide and delicious assortment of appetizers were on hand to greet the 120-plus guests that evening, with raffle tickets sold and placed in various bags for a chance to win one of a plethora of items ranging from meals at local restaurants to waffle irons to artwork, jewelry, and ceramics, all donated by locals. The clubhouse was decorated and made fully operational by the hard work of Diane McCalvy and her long list of volunteers.

The Heads or Tails contest is now a staple at this event, with about 50 people vying for the cash prize. Tails came up four times in a row, quickly eliminating the vast majority, eventually winnowing down to Harry Ehrlich, Jeff Frazier, and Barrie Little. Frazier chose tails, and he walked off smiling broadly with the cash.

There were 13 golfers with chip-ins, and they all lined up and dropped their winnings in the pot for the Senior Center cause. The 18-hole golf tournament was won by the foursome that included Jim and Pam Garrison with a total gross score of 229 (216 is par). A meager three strokes behind in second place were the "Four Horsemen of Borrego" that included this report-er. Winners from first to fifth place all tossed their winnings into the pot for the seniors.

Dan Wright thanked the crowd for their generosity that includes meals for shut-ins (6,000 meals last year) and activity support at the Center.

He also unveiled an architectural rendition of a new Senior Center, to be built, hopefully, on land next to the Library donated by Jenny Wright, wife of the late and great Bill Wright.

It was a fun event for all who participated, lots of money was raised, and the volunteers who contributed to its success are to be congratulated for their hard work.