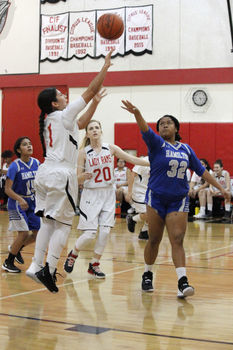 The hopes for an undefeated regular season has been broken, thanks to the Lady Bobcats of Hamilton on Dec. 10, who came away with the 39 – 28 win.

It was back-and-forth throughout the game, but the Lady Bobcats found a way to run away with the lead in the second half, and never looked back.

"Well I think we put a lot of internal pressure on ourselves to try to keep the streak alive, and I'm proud of the girls effort and everything they brought to the game tonight," interim head coach Tim White said. "But you could see we were pressing and just felt a little stressed. It was unusual for us to panic in moments and turn the ball over as much as we did, so we gotta clean that up. But bottom line is they fought back in that game. I loved the perseverance, their effort and fight, we just came up a little short. They were just a bit better than us."

The Lady Rams were back on the road to face the Lady Bobcats once again Dec. 20, in hopes of avenging the loss.

Going into that game, White said his mindset for the team was to do a better job down low and control their defense in the paint.

"Offensively, we have to do a better job on our movement, and when running a motion offense, if you're not moving, not creating space, then you're not gonna get the shots you want. A lot of times it felt like we were standing around watching, White said.

Both teams were aggressive on defense, as it seemed as though no one could get a shot to the basket.

After a rebound by junior forward Laurynn Strate and a steal for a layup by junior guard Marla Manzano, the Lady Rams were on the board first, 4 – 0.

Midway through the first, the Lady Bobcats managed to tie the game at four. With 19 seconds to go, they took the lead, 6 – 4.

It was back-and-forth to begin the second quarter, but the Lady Rams fell back to be down heading into the half.

Manzano tied the game back up after a layup down the middle.

The Lady Bobcats answered back with back-to-back jumpers, 10 – 6.

That's all the Lady Rams would get as the Lady Bobcats put up an unanswered seven points, to extend their lead, 17 – 8.

The Lady Rams found some momentum in the third quarter to get within one with less than four minutes on the clock.

Junior guard Baylyn Villafana went up for the jumper and a minute later, hit a shot behind the arc, 19 – 18, Lady Rams down one.

With a minute to go, Barclay drove down through the paint to get the Lady Rams within one. Again, the Lady Bobcats put one up on their end, 23 – 20.

However, Villafana had a different plan, hitting another three to tie it up at 23, heading into the fourth.

Hamilton managed to get three shots up to start the quarter, before Strate broke that streak, after a put-back rebound, 30 – 25.

The Lady Rams managed to get just three more points after that, as the Lady Bobcats did not let the lead slip this time.

It is unfortunate the streak was broken, but White knows they have a lot to work on by what was shown throughout the game.

"We gotta take care of the rock and be more efficient with the basketball and I think we'll be fine," White said.