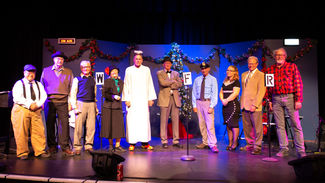 It's the story of a generous Building and Loan owner set during Christmas in mid-1940s Bedford Falls, New York, who dearly loves his wife and family, but who finds himself in desperate financial and emotional straits, so much so that he makes a wish – that he was never born.

The 1947 film classic, "It's a Wonderful Life," directed by Frank Capra and starring Jimmy Stewart as George Baily and Donna Reed as his wife, Mary, had a shaky beginning at the box office, and didn't win a single Oscar, but it has slowly become a favorite in Christmas film fare over the past 72 years.

From Dec. 13 – 15 at our Performing Arts Center, Artistic Director George Keith brought the Live Radio Play version by Joe Landry to the stage. Ten of our local actors took on the the roles of 45 characters, including a "Foley" artist and his array of sound effects.

Act I set the tone of the play and introduced the characters who provided all the background necessary for an understanding what was to come in Act II. The variety voice changes were wonderful. With many of the different actors doing multiple characters (scripts -in-hand for a live radio broadcast) but in the same costume, it was at times difficult to separate, at least visually in a specific role, who was who. However, all one had to do was close one's eyes for a moment or two, and the magic of audio-only radio came through loud and clear, and especially via a multitude of sound effects – doors opening and closing, for instance – by Foley-man Craig Johnson.

But all eyes and ears were wide open in Act II, where the visual and dramatic performance by Gary Edwards as George Bailey gave to the audience what a radio audience would only hear, not see. From the Christmas Eve lead-up to his wish he was never born, and throughout dialogue with Clarence the Angel as a result of that wish, Edwards' emotion and passion was a stirring build-up to his climactic realization that not only his family in Bedford Falls, but his friends and bank customers alike would all have been a lot worse off had George not been born.

A key character in this play is the antagonist, Mr. Potter, the man who owns almost everything in town except George Bailey's bank, and Potter pulls an act of abhorrent dishonesty to get it. Mr. Potter is a character we hate, deeply. Think about it this way: The owner of both the Mall and Borrego Center complexes and other properties, Jim and Anne Wermers, as the greediest, most unscrupulous and despicable people Borrego Springs has ever known. OK, that's a huge stretch because they're such wonderful people. But Jeff Salton pulled off a spot-on cold and calculating Mr. Potter that played perfectly against the otherwise kind and generous George Bailey and the fine folks in Bedford Falls.

The grand moral of the story is that whether in Bedford Falls or Borrego Springs, the world can be a better place with you and me in it. We just have to make that a reality according to few basic guiding principles.