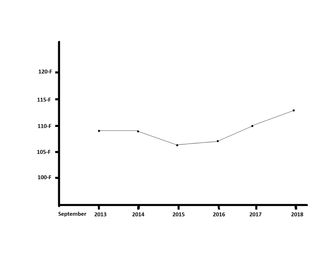 Weather experts around the globe say "this year" is the hottest year on record. Thanks to global warming, they've said that for so many years since 2000, it's become rather routine.

So it came as both a reporter's dream and an opportunity to inspire local bragging rights when the San Diego Union-Tribune published on a page of temperature data (from Aug. 21) from cities in the U.S. and around the world. Borrego was shown as tied with Death Valley and Kuwait City at 113ºF, which were, for that day, the hottest places on Earth.

If only it were true, it wasn't. It sure felt like the hottest place on Earth, but subsequent data from NOAA sent by Sicco Rood up at the UCI Steele-Burnand Desert Research Center shot that notion down.

In lieu of announcing bragging rights, and since we're now in September, let's turn to the subject of September heat. Over the past six September's, average daily maximum temperatures began with four consecutive years, 2013 – 2016, within a single degree of the 2016 mark of 108ºF (see accompanying graphic). The next two September average daily max temps began to climb (109ºF) and peaked last year with an average September daily max at 114ºF.

While three consecutive years of rising average September daily max temps is clearly a concern for future trends, there are just enough data points to make an accurate prediction regarding this September.

Data for August average max daily temps for seven years prior (starting again with 2013) are, respectively: 113ºF, 112ºF, 116ºF, 114ºF, 117ºF, 116ºF, and 118ºF (through Aug. 29). This shows the max average daily temperatures for the past seven Augusts have risen by six degrees-F. Once again, limited data necessitates caution with regard to predictions, so it's merely an anecdotal coincidence that six to seven years of temperatures for both August and September reveal a brief history of increasingly hot monthly max temperature averages.

In conclusion, because of reliable data from credible sources around the globe, we know that the Earth is warming, slowly but surely, and doing so every year. How we're going to deal with that reality is something else entirely.