Weather Or Not: Thunderstorms in Borrego 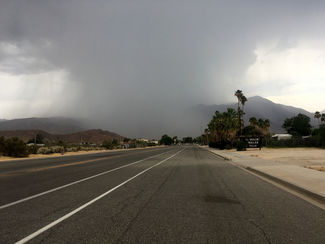 Borrego Springs experienced its first thunderstorm of the Summer on the afternoon of July 23, followed by two more consecutive days of afternoon thundershowers. Three days of consecutive thundershowers in Borrego has not been recorded on the Park rain gauge since 2013.

Conditions experienced were consistent with Anza-Borrego Desert State Park rain gauge data: intense rain under strong, near-horizontal winds from the south – measured in at a little over 1/3-inch during a two-hour period, with winds exceeding 40 mph.

It took 20 minutes after the flash flood warning for surface water, at times several inches deep in swales across the highway, to make its way down Palm Canyon Drive and reach Christmas Circle at 4:08 p.m. The thunderstorm was over within an hour, so no significant flooding occurred as the water rapidly seeped off into the thirsty desert.

AccuWeather reported an inch of rain in the upper mountains as the storm passed to the north. Given the configuration of the Park's and virtually every other rain gauge with small horizontal openings facing upward, the accuracy of measuring wind-blown precipitation ranging from angles of 45-degrees to nearly horizontal may be problematic.

The rains on July 24 and 25 were less heavy but still contributed an additional 0.26 inches to the total of 0.61 inches over the three days.

In other weather-related news, Borregans experienced triple-digit temperatures every day in July, according to Park data, including 13 days at or exceeding 110º F, two consecutive days at 115º F (there were actually golfers out playing when it was 114º F – see photo), and a monthly high temperature of 116º F on July 27.

July's average maximum temperature topped out at 109.4º F, a full degree higher than last year's average max temperature, but almost exactly the same as in 2016 and 2017. Just last year on July 24, a mid-afternoon high temp of 123.3º F was recorded in Borrego.