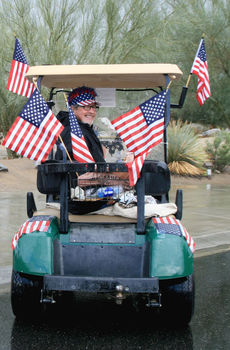 Canadians escaped the Polar Vortex only to be done in by the Borrego Vortex. The 2019 Canadian-American Borrego Cup, held at the Springs at Borrego golf course, didn’t end in another tie score to moan and groan about, like four years ago, and five years ago. Team USA held on to the Cup with a three-peat, their third straight win.

The Can-Am Cup is really all about fun. The traditional kick-off with a parade, usually held in nice weather, was marred by rain, but one wouldn’t know it was such a downer by the pervasive happiness of all who participated; carts were proudly displayed, decked out in Canadian or American bunting, and rum shots were available to warm up the innards of rain-soaked yet hardy participants; Lady Liberty held high both torch and umbrella; course play among 92 competitors in 23 pairings for each side and over the 2-day event was competitive in match play but always friendly; the “Horserace,” starting with 12 male/female teams went down to the wire, won on a 30-foot downhill birdie on the course’s signature final hole; and Team USA was declared the winner (ll matches to seven) at the dinner/awards banquet.

The Horserace was particularly interesting, if only to watch players do their thing at the tee box, on the fairways, and on the green – in front of a lot more onlookers than usual. Nerves were obvious as players made their putts in total silence while 50 pairs of eyes followed the track of the ball, sometimes short or long, other times into the hole. It gives one an appreciation for the pros who play with hundreds of gallery eyes on them and millions more on TV.

But there were, among the pack, certain steely-eyed amateur golfers who didn’t let the nerves get to them. Case in point – Jim Haigh and Janice Payne, a brother-sister duo playing for the American team. In a Scramble format (alternating hitters, best ball all the way to the hole), five pairs reached the final hole. Janice Payne had cleared the water and left their ball 30 feet uphill from the pin. With all the shorter putts going first, the pair had plenty of time to read and quietly discuss the lay of the green while others putted.

Then, finally, came Jim Haigh’s turn. A two-putt for par would mean a chip-off, but he wasn’t having any of that. From 30 feet up the slope, Haigh struck the ball, it rolled nicely towards the pin, slowed as it took a slight left, and fell center-cup for the win. It was both a dramatic and emotional moment for all who witnessed it.

The incomparable teaching pro Brandy Casey coordinated the entire tournament as she has done since its inception 10 years ago. At the dinner/awards banquet held in the RoadRunner Clubhouse, Brandy made the announcement that she will be “retiring” from future Can-Am oversight, time to put away the pairings charts. Casey received a very nice engraved plaque from American and Canadian team captains Linda Holler and Ginny Dennehy, respectively.

So Team USA holds onto the coveted Cup for another year, and the Canadians are left with only the hope that a Polar Vortex snowstorm doesn’t form an ice wall along our northern border entry points to prevent their being here for next year’s tournament and try and end Team USA’s three-peat in Cup wins.