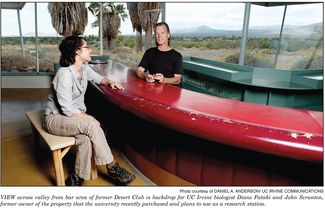 Mr. Scranton moved to Borrego Springs in 2002, and spent time between the desert and his native east coast during the final years of his life.

Born on August 27, 1950, in Orange, NJ, he lived in South Orange in his youth. As a young man he moved to New York City where he worked as a visual artist.

Mr. Scranton was involved in the early planning stages of the Borrego Springs Community Park and sat on the committee that created original plans for the county property located near Church Lane.

A reserved and private person, Mr. Scranton became more publicly known after he and his former wife, Lisa Fugard, purchased the historic Desert Club in 2005 in the foothills of Anza-Borrego Desert State Park. The building, built in 1949, had been closed to the public for a number of years following the closing of the Galeria, an art studio formerly sited on the property. The club had originally opened in 1950 under the direction of early Borrego Springs developer A.A. Burnand.

With an interest in mid-century modern architecture and the hopes of restoring the Desert Club to its former position as a gathering place in Borrego Springs, Mr. Scranton worked to revive the property and restore both the building and the grounds to their original state. He painted, tiled, and replanted the property working mostly alone.

In 2011, The Desert Club became home to the University of California-Irvine's Desert Research Institute, a partnership with Anza-Borrego Desert State Park and a hub for desert researchers. Mr. Scranton left the desert for a period, travelled and fished along the East coast, and eventually returned to live out his final years in Borrego Springs.

In addition to his work to restore the Desert Club, Mr. Scranton has left his greatest legacy in his children: a twelve-year-old son, Gavyn, of Encinitas and an adult daughter, Satjeet, who resides in New Mexico. He is also survived by a brother and two sisters, all residing on the east coast.