Rams Come Up Short Against Dragons 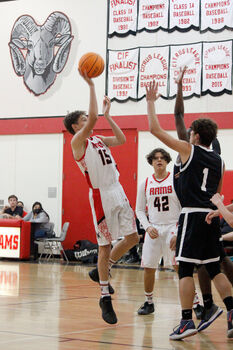 Junior Brody White goes up for the shot one-handed.

The Borrego Springs Rams basketball team hoped to begin the 2023 year with a win and continue its winning streak, as they faced the San Pasqual Dragons on Jan. 11 at home.

However, it seemed that the Dragons had all the momentum on their side and never let up, resulting in the Rams fall, 73 – 17.

The team was also back in league action, facing Warner Springs and losing a close one, 36 – 30.

They also faced San Pasqual Academy once again, this time in league play, in an away game, which took place after print.

In the home game against SPA, the scoring started off quick.

After driving down the middle, freshman Christopher Alcaraz was fouled and made his way to the free throw line, sinking in one, 2 – 1.

However, his injury proved to be costly as he was later removed from the rest of the game.

They were answered back with a pick and roll by junior Brody White with the assist from Alcaraz to get within one, 4 – 3.

Momentum continued to build for the Dragons, as they ran away with the lead. They were much more fast, aggressive and managed to connect easier with the basket.

To start the second quarter, the Rams seemed to be much more aggressive.

SPA scored a layup to answer back, but so did the Rams.

White found freshman Travis Asche for the jumper in the paint, 28 – 9.

In the third quarter, the Dragons continued to sink in rebounds, layups and jumpers with all the momentum on their side.

With two minutes left in the third quarter, the Rams were down to four players on the court after White went down hard, Troncoso fouling out and Alcaraz out since the first quarter.

SPA on the other hand opted to do four as well.

In the fourth quarter with six minutes left, the Rams were another man short, as they were playing 4 vs. 3.

The Rams could only get one shot in for the fourth quarter, as the Dragons continued to shoot until the last minute.

It just seemed from the beginning, the Dragons had all the momentum and edge of the game. The Rams did their best with what they had, and unfortunately could not overcome the large deficit.

Same as the girls basketball team, the Rams are also back in action in consecutive away games beginning Jan. 20 against San Pasqual (non-league), Calexico Mission (league) and West Shores (league), before returning home on Jan. 31 to face Warner Springs in a league game.