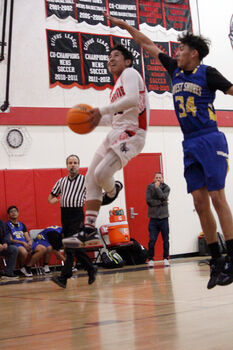 Freshman Chris Alcaraz weaves through the middle with a windmill.

The Borrego Springs boys' basketball team is off to a solid start to begin the 2022 season.

The Rams were off to a red-hot start to begin the first quarter, easily connecting with the basket. All cylinders seemed to be working for the Rams.

Midway through the first quarter, freshman Chris Alcaraz weaved through the middle for the layup, 6 – 0.

Junior Brody White sank in back-to-back layups, one of which was assisted by sophomore Isaac Dorado, 10 – 0.

Three minutes left to go in the first, White found Alcaraz open for the layup, 12 – 0.

As the clock continued to wind down in the first quarter, all the momentum stayed with the Rams.

It also seemed that no one could stop the speed, agility and the skill of Alcaraz who in the blink of an eye would be at one end of the court, then scoring the next.

In the second quarter, the Wildcats of West Shores were finally on the board with a layup.

White sank in a free throw to get the Rams on the board in the second quarter.

West Shores hit a shot behind the arc, followed by a free throw, but were still down, 21 – 6.

White sank in shots with the assist of Alcaraz to extend the Rams lead.

The Wildcats also added baskets to their score, but were still down, 27 – 11 at the half.

In the third quarter, the Rams picked up right where they left off, continuing to add to the fire.

With two minutes left in the quarter, White found senior Bryan Troncoso open in the paint for the shot, 40 – 13.

Both teams continued to exchange shot attempts, but it was the Rams who remained in the lead, 42 – 15.

Heading into the fourth quarter, the Rams hoped to seal the win and continuing their hot streak.

White started off the fourth quarter with back-to-back steals and the layup to finish, 46 – 15.

However, it seemed that things began to come to life for the Wildcats, who were connecting with the basket much better, and sinking in three-pointers to get within spitting distance.

With two minutes left on the clock and in the game, Troncoso had another rebound and sophomore Jacob Dorado added a layup of his own, 50 – 25.

Despite all the Wildcats efforts, it was not enough to get past the large lead the Rams had built earlier in the game, resulting in the Rams 50 – 30 win.

With such a young core for this team, this Rams team will be a force as the season continues. They have a solid 1-2, who are knowledgeable and fast, and prove to be hard to stop.

The team is set to face San Pasqual Academy at home on Wednesday Jan. 11, 5:30 p.m. in a non-league match-up, before facing Warner Springs resuming league play.