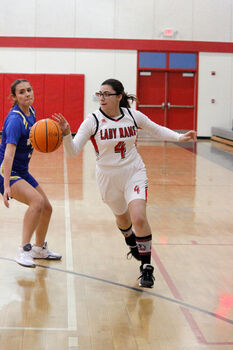 After a slight delay to the start of the game due to transportation issues, the Borrego Springs girl's basketball team was underway to take on West Shores at home for their last game of the 2022-year before resuming play in January 2023.

The Lady Wildcats of West Shores were on the board first, 2 – 0.

However, it seemed that the basket was not cooperating with either team, as both struggled to get the ball through the net.

Midway through the first quarter, sophomore small forward Melanie Urquidez got the Lady Rams on the board with a side step from a screen, tied at 2.

That was all either team got in the first quarter.

Just like the first quarter, Warner Springs got the ball in to start the second.

Sophomore point guard Abigail Gonzalez tied it back up with a jumper in the paint.

Both teams continued to go back-and-forth, exchanging shot attempts, but the Lady Wildcats were up by two at the half.

The Lady Rams came out much more aggressive to begin the third quarter and second half.

Gonzalez had back-to-back steals, scoring two to give the Lady Rams a two-point lead, 10 – 8.

Both teams continued to fight for the lead, keeping the game close.

In the fourth, the Lady Rams once again started the scoring off.

Then Gonzalez found senior power forward Alessandra Reyes for the assist, 18 – 16 for the lead with 6:29 on the clock, and the momentum began to shift in favor of the Lady Rams.

With 3:24 on the clock and left in the game, the Lady Wildcats broke up the scoring with a layup of their own to finally get on the board in the fourth.

The clock continued to tick away, the Lady Rams were holding on to a one-point lead, 23 – 22.

After sinking in two layups and the defense holding it down, the Lady Rams earned their first league game win of the season.

Despite many back-and-forth attempts and positive outlooks for the Lady Rams, there are some things the team will need to work on. Before beginning Manzanita League play, this team will be a force if they can straighten out those kinks, as they have many weapons on the team to depend on.

The Lady Rams are back on the court at home on Wednesday Jan. 11 to face San Pasqual Academy in a non-league match-up. Game is set to tip-off at 4 p.m.