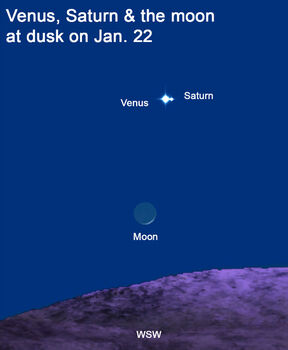 Aim binoculars toward these groupings and you'll be stunned by how three-dimensional the scene appears. Of course, this is an illusion since we're unable to perceive true depth in the cosmos, but it sure does produce a pretty picture.

You may have noticed a brilliant "star" shining in the southwestern sky at dusk, but you might have missed the other one not far above it.

Actually, these aren't "stars" at all; they're planets – the brightest in all the heavens along with one of the faintest – and they are gearing up to put on quite a show for stargazers.

The brighter of the two is Venus, a world the same size as our own Earth – about 8,200 miles across – and shrouded by highly reflective clouds. The other, considerably fainter, is the ringed planet Saturn.

If you've been watching the pair the past few nights you've surely noticed that Saturn and Venus appear to be converging from night to night. This is because they, along with our Earth, orbit the sun, and our constantly changing viewpoint makes them appear to drift independently against the more distant and "fixed" stars.

On the evening of Sunday, Jan. 22, these two will appear remarkably close together – less than half a degree apart – and will form a "double star" in our southwestern sky at dusk. On that night it might be tough to spot Saturn without binoculars or a small telescope because the glare of Venus will overwhelm this dimmer planet, but the view of the pair through a small telescope should be spectacular! You'll need to get outside 20 – 30 minutes or so after sunset to catch them at their best.

On this night you might also notice the thin crescent moon below these planets. It might be tough to see but if you have a very low horizon in that direction, try scanning the area with binoculars after sunset and you might catch a glimpse.

If you miss it, don't worry. On the next night, the waxing crescent moon – complete with a full disk of "Earthshine", light reflecting back onto the lunar dark side from the Earth itself – will appear just above Venus and Saturn, though they will have separated considerably by then.

By Wednesday, Jan. 25, the moon will have drifted farther eastward on its own orbit and its thicker crescent will appear quite close to the bright gas giant planet Saturn.

Aim binoculars toward these groupings and you'll be stunned by how three-dimensional the scene appears. Of course, this is an illusion since we're unable to perceive true depth in the cosmos, but it sure does produce a pretty picture.

And speaking of pretty pictures, this is the time to try taking photos. You don't need fancy or expensive equipment; just a camera with a zoom lens and a tripod will do fine, and even a smartphone with some magnification will do just fine.

If you shoot around 20 – 30 minutes or so after sunset, you can probably trust your camera's automatic settings. If not, try setting your camera to ISO 100 or 200 and shooting 1/3 of a second or so at f/8.

You'll need to adjust settings as you go, however, since the light changes rapidly at dusk, so don't be afraid to experiment.

Enjoy the planetary sky show, and please email me if you produce some nice photos. I'd love to share in your success!