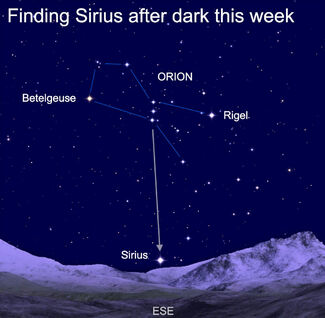 Watch Sirius and you'll soon discover that it doesn't just seem to twinkle wildly; it fires off colorful sparks that often prompt calls to observatories and emergency personnel.

It began as a five-verse poem called "The Star" that appeared in the 1806 publication "Rhymes for the Nursery." More than three decades later, this poem by Ann and Jane Taylor was set to music: a 1761 French folk tune that, coincidentally, seemed to fit perfectly:

"Twinkle, twinkle, little star / how I wonder what you are / up above the world so high, / like a diamond in the sky."

Many of us have grown up singing this magical song and believing that stars actually twinkle. But do they?

Twinkling, or, more scientifically, "scintillation," originates not with the stars themselves, but with the air through which their light must travel before reaching our eyes. We've all seen this effect on a hot summer day when our view of a terrestrial scene over a sizzling roadway is distorted by rising heat waves. Similarly, a star's light distorts thousands of times each second as it travels from the vacuum of space into our thick, turbulent atmosphere, especially when the star appears low in the sky.

The most dramatic example of this is the bright star Sirius, the Dog Star, now appearing low in the east-southeastern sky after dark. It lies beneath a line traced by the three equally bright "belt" stars of Orion, the hunter.

Watch Sirius and you'll soon discover that it doesn't just seem to twinkle wildly; it fires off colorful sparks that often prompt calls to observatories and emergency personnel. The effect is even more spectacular when viewed through binoculars or a telescope thrown slightly out of focus. Whenever I do this, I just can't help imagining the voice of Tommy Chong exclaiming, "Wow, the colors, maaan!"

But this is a perfectly natural phenomenon, at least to those who peer skyward more than once every year or so. Since the star's white color is actually a blending of every color of the spectrum, and each is bent rapidly in different directions at different times by moving air currents, this brilliant star appears as a colorful celestial sparkler.

It was this very spectacle that led author Martha E. Martin to describe its appearance in her 1907 classic book, "The Friendly Stars."

"He comes richly dight in many colors, twinkling fast and changing with each motion from tints of ruby to sapphire and emerald and amethyst. As he rises higher and higher in the sky he gains composure and his beams now sparkle like the most brilliant diamond -- not a pure white, but slightly tinged with iridescence."

Yes, twinkling stars have always been a magical part of our night sky, and an inspiration for that timeless poem that we learned as a children's song long ago. But what if "The Star" had been written not in the 19th century but more recently?

Well, in our highly technical world you can be sure that someone has already done so; in fact, a more 21st-century version is often attributed to John Raymond Carson and goes like this:

Ha! Who says romance is dead?