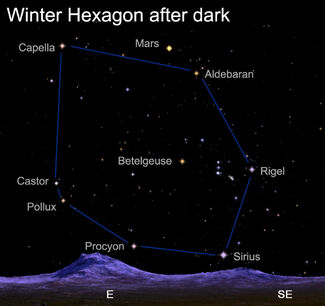 One of the largest asterisms in all the heavens consists of bright stars from no less than six constellations. It appears in our evening sky right now and is called the Winter Oval or Winter Hexagon.

If you've ever quit an evening of stargazing in frustration because you couldn't find a great bear, an archer or a winged horse in the sky, take heart. Neither can I.

Unfortunately, some beginning skywatchers expect to see such images among the heavens, but this is quite unrealistic because... well, let's face it, folks... there are no pictures up there.

The fact is that the constellations look no more like their namesakes than the George Washington Bridge looks like the father of our country. The ancients likely used groupings of stars simply to represent important objects, animals and people, not necessarily to resemble them.

What we can see in a dark sky far from city lights, however, are stars – plenty of them – and with some imagination, we can trace among them simple patterns. Astronomers call these "asterisms," and some of the easiest to create are basic geometrical figures: triangles, arcs, squares and more.

There's no reason to limit ourselves to stars within individual constellations, either; in fact, we can form one of the largest asterisms in all the heavens by using bright stars from no less than six constellations. This appears in our evening sky right now and is called the Winter Oval or Winter Hexagon.

To find it, look eastward after dark this week. There you will find the brilliant white star Sirius not far above the southeastern horizon. This star is often known as the "Dog Star" and is the brightest and one of the nearest of all stars in our sky. It will form our starting point for outlining the hexagon.

From Sirius, follow a line to the left until you encounter another fairly bright star: Procyon, part of Canis Minor, the little dog. Then continue leftward but begin heading upward. Here you'll find two nearly equally bright stars: Pollux and Castor, the main stars in Gemini, the twins. Above these two lies another bright one: Capella in Auriga, the charioteer.

From Capella, slide to the right and downward, until you encounter the orange star Aldebaran in Taurus; don't confuse it with the brighter planet Mars which happens to appear near this star right now. Aldebaran represents the "fiery red eye" of Taurus, the bull, staring angrily down toward Orion, the hunter. Dropping down even farther and to the right, you'll encounter Rigel in Orion's knee. Then, head back down to the left toward Sirius where our journey began.

Inside the Oval, not far from its center, lies another bright star that marks the shoulder of Orion. This is the red supergiant star known as Betelgeuse.

As the moon orbits the Earth it will soon appear to cross the stars of this region. It will enter the hexagon near Mars on the night of Jan. 30 and will exit just below Pollux on Feb. 2.

All totaled, this huge asterism encompasses eight of the 18 brightest stars visible to stargazers in the Earth's Northern Hemisphere, and this week, one planet and next week even the moon!

Once you've found the Winter Hexagon, perhaps you can search the sky for other geometrical figures, letters of the alphabet and punctuation marks. Periods don't count!