Return of the Great Celestial Hunter 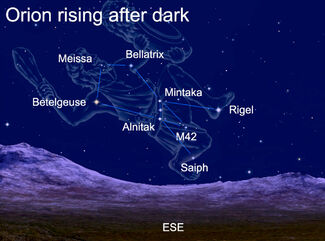 Orion is one of those star groupings that happens to lie directly over the Earth's equator; specifically, it's the westernmost star of the belt (Mintaka) that owns this distinction.

One of my favorite constellations in all the heavens has made its grand reappearance in our evening sky, much as Robert Frost described in the opening lines of his famous poem "Star-Splitter":

"You know Orion always comes up sideways. / Throwing a leg up over our fence of the mountains..."

I remember as a young child standing in the snow, gazing into the frosty night sky over Easton, Pennsylvania, and marveling at the glistening stars of Orion, the hunter. At the time, I had no idea what I was seeing, but I found its hourglass shape to be unmistakable and was completely enthralled by its three equally bright central stars that seemed to form a perfectly straight line.

How unusual, I thought. Could it be that I had actually discovered this amazing stellar configuration?

It wasn't until many years later that I learned that ancient skywatchers had beaten me by a few millennia.

This ancient star grouping was known to the Sumerians of Mesopotamia. The early Egyptians saw him as the god Osiris, while the ancient Greeks knew him as the son of the sea god Poseidon and a great and strong hunter. And why not? Orion is one of the few constellations that resembles its namesake.

Two stars, Betelgeuse and Bellatrix, mark the shoulders of the celestial giant. Saiph and Rigel form his knees. And his midsection sports three stars in a nearly straight line – Alnitak, Alnilam and Mintaka – that trace his belt. In place of his head lies a very faint star named Meissa, suggesting that Orion may be more brawn than brains.

But that's not all. Fainter stars mark his outstretched arms holding a shield and a club, while a sword hangs from his belt and appears as a hazy patch of light known to astronomers as M42: the Great Orion Nebula. With even a small backyard telescope we can see the amazing structure of this stellar nursery, and the four tightly packed young stars near its center that illuminate it from within.

Orion is one of those star groupings that happens to lie directly over the Earth's equator; specifically, it's the westernmost star of the belt (Mintaka) that owns this distinction. This means that the top half of the constellation is part of the Northern Hemisphere sky, while the lower half is claimed by Southern Hemisphere stargazers. If you happen to live within the Arctic Circle, you'd see only Orion's upper body; the converse, of course, would be true if you lived in Antarctica.

In other words, no matter where in the world you live or travel at this time of year, Orion will always be a welcome and familiar companion in your sky. But it might not always look the same; if you've ever spotted Orion from the Southern Hemisphere, you might have been perplexed because he seems to be standing on his head – not surprisingly, since stargazers south of the equator are inverted from those of us in the north.

Yes, Orion represents quite an amazing chunk of celestial real estate, even with a nearly full moon this week. I guess that's why it's one of my favorites of all!