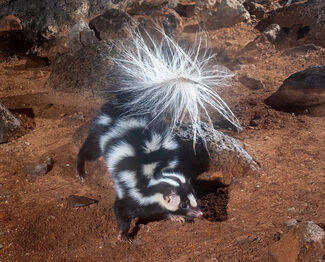 They are energetic and cute little stinkers but count yourself lucky if you see one here on the desert floor.

The spotted skunk is a rare sight in the desert, although there are records of tracks or recent sightings in the Carrizo Badlands, Fish Creek area and Shelter Valley.

Unlike the large and more common striped skunk, the western spotted skunk prefers higher elevations and is more common in locations such as upper Coyote Canyon, the San Ysidro mountains and those portions of Anza-Borrego Desert State Park that climb into the Laguna Mountains.

Only about 18 inches in length, the spotted skunk is about half the size of the larger striped skunks.

They are not really spotted at all, but the white stripes are random, giving the impression they are spotted, unlike the striped skunk that has two broad white stripes running the length of the body.

Like their larger cousins, the spotted skunk also packs a wallop. When threatened, they will raise their large, tufted tail (not a good sign) and produce their characteristic foul-smelling musk, sprayed on predators by two glands.

Here's a survival tip. They do give fair warning.

If you encounter a skunk and it stamps its front feet, then raises its tail and hindquarters, it's a good idea to retreat rapidly.

The good news is, they are not aggressive and prefer to live by reputation with the hopes you will retreat rather than experience the unpleasant results.

These are nocturnal creatures, foraging at night for just about anything they can find, including insects, small mice and lizards, berries and fruit. Scorpions are one of their food sources, also.

Their sharp claws make them efficient diggers and they build dens in ground holes lined with leaves and native grass.

The breeding season is in the fall, and they will produce two to five kits after a lengthy gestation period lasting up to 250 days. The kits will remain with the mother for about eight weeks.

For those of you with game cameras, keep an eye out for this elusive little neighbor.