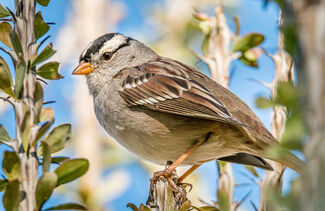 It may be no surprise, but nature seems quite happy in the desert right now.

Not only has there been a spectacular fall wildflower display, but also an above average number of wild bird species counted during the 38th annual Audubon Christmas Bird Count in Borrego Springs.

As happens like clockwork every year, 85 volunteers spread out Dec. 18 within a 15-mile circle centered on De Anza Country Club to conduct the annual bird census.

The Christmas Bird Count happens this time of year throughout North America with over 80,000 counters at more than 3,000 locations. The annual snapshot is a valuable citizen-science project that provides a snapshot of migrations, bird populations and flock health for hundreds or species.

Preliminary results show a total of 117 species confirmed along with a total of 9,883 birds.

"This was slightly above average compared to counts over the previous 10 years," McNeil said.

This was also a year of newcomers joining in the count effort, with about 40 percent participating for the first time.

One of the notable events of the count was an invasion of American robins, nearly three times more observed than the previous high in 2014 spotted in the Country Club areas.

"They were also scattered widely in smaller numbers, "McNeil said.

Mountain bluebirds also put on a good show for bird counters this year.

One of the highlights of the annual bird count is the gathering for lunch at the UCI Steele/Burnand Deseret Research Center where teams share stories of their day in the field and compile team results.

The Audubon Christmas Bird Count began in 1900 when 27 avid birders headed out on Christmas Day after a holiday meal.

Since then, it has grown to the massive event it is and is conducted sometime over the holidays from mid-December to early January. In addition to the Borrego Circle, there are counts at Salton Sea, Lake Henshaw, Escondido, Rancho Santa Fe, Oceanside, and San Diego.

The Borrego Circle is centered on De Anza Country Club and most counters begin at dawn and scatter to all areas within the circle to conduct the census. Some of those areas are right in the Borrego community, like the Roadrunner Club, De Anza Country Club and Borrego Springs Resort, but also include more remote areas like a hike into Palm Canyon or by four-wheel drive into Coyote Canyon.

Additional locations include the San Ysidro Mountains at the eastern fringe of the Los Coyotes Indian Reservation, Borrego Sink, upper desert locations such as Culp Valley, along with local residential areas and agricultural fields.

Counters are on the lookout for local resident birds in addition to seasonal migrants or rare visitors who may be passing through.

Final count numbers will be provided to interested groups and posted on the UCI, ABF, and Anza-Borrego Desert State Park web sites.

Total official count results take time to compile, because some are sent in by e-mail after participants return home.

Numbers released this week are fairly complete, but there could be a few changes in overall totals when all tally sheets have been submitted.