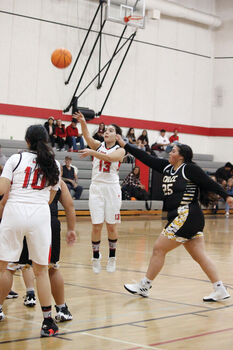 Sophomore small forward Melanie Urquidez goes up for the shot at the free throw line.

Under the leadership of new head coach, Vanessa Rodarte, the Borrego Springs girls basketball team opened up the 2022 season with back-to-back away games against Mountain Empire and Hamilton, respectively.

Against Mountain Empire, the Lady Rams held the Lady Redhawks to just four points all game and came away with the 15 – 4 win.

They hoped to keep that streak going as they faced Hamilton, but fell short, 32 – 17.

The team also faced Mountain Empire again, this time at home, as well as High Tech Mesa and Warner Springs in an away game. All resulted in a loss.

The Lady Rams are currently 2 – 4 on the season, and have not yet begun Manzanita League play.

Against the CVLCC Lady Cobras, the game had much back-and-forth. The Lady Rams defense was tough, only allowing two points.

In the second quarter, both teams exchanged baskets here-and-there, committing their own turnovers. However, the Lady Rams remained in the lead.

Midway through the second quarter and first half, senior power forward Alessandra Reyes got the rebound in the paint, putting it up for two, 12 – 8.

With 1:18 on the clock, senior center Minnie Camacho hit a jumper with the assist from small forward Hannah Strate, as they added to the Lady Rams lead.

It was a constant fight to finish the first half with good defense and rebounds.

The Lady Rams opened the third quarter right where they left off.

There was no score until midway through the fourth quarter, as Urquidez found an open shot from the free throw line.

The Lady Cobras held control of the ball until a minute left, as they put up back-to-back jump shots, and a three-pointer to get within nine, 26 – 17.

The Lady Rams managed to get one more shot in before the end of the quarter, thanks to Strate, sealing the win, 28 – 17.

The game was slow-paced, but with a young core, it will be nice to see what the team has in store as the season progresses. And under new leadership with Rodarte, who is quite familiar with the offense and defense that is run, it will be great to see the developments that arise.

The team is back home on Dec. 13 to face Hamilton and on Dec. 16 will face West Shores. Both games will tip-off at 4 p.m.