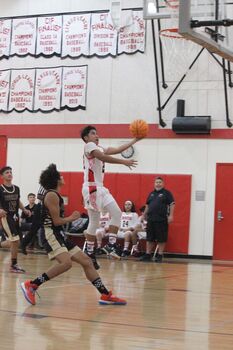 Freshman Christopher Alcaraz gets the steal and goes for layup, managing to also draw a foul.

After a comeback win against the Hamilton Bobcats to begin the new season, the Borrego Springs boys basketball team hoped to bring that fire against the Chula Vista Learning Community Charter at home on Nov. 28.

It was much back-and-forth, but the Cobras found the Rams weak spots as they ran away with the 41 – 30 win.

The Rams bounced back with back-to-back wins over Warner Springs in a home and away game.

The team also faced Hamilton and CVLCC once again, both away games, which took place after print.

Against CVLCC at home, it was fast paced as both teams came out aggressive to get the momentum going. But the Cobras were on the board first with a shot behind the arc.

The Rams managed to get on the board with a floater by junior Brody White with the assist from freshman Christopher Alcaraz, 3 – 2. Midway through the first quarter, senior Bryan Troncoso gave the Rams the lead with a rebound, 4 – 3.

After forcing the foul in the paint, White added a free throw.

With a minute left to go, Alcaraz hit a side-step jumper to give the Rams a 7 – 3 lead, and all the momentum.

In the second quarter, that momentum shifted toward the Cobras who dominated and made the Rams chase. To begin, the Cobras sank in a jumper and back-to-back three pointers, taking the lead, 11 – 7.

Alcaraz answered back by hitting a shot behind the arc of his own to get the Rams within one, 11 – 10.

With less than three minutes to go in the second quarter and the half, the Cobras continued to extend their lead over the Rams.

White managed to score a floater before the buzzer, 19 – 12.

It seemed momentum began to deflate for the Rams who struggled to stop the Cobras in the paint. The Rams hoped to get something going for the second half, like they did against the Hamilton Bobcats, where they were down 10, but came away with the two-point win in the end.

Sophomore Isaac Dorado found White open for a jumper to begin the third quarter. CVLCC answered right back with a shot of their own.

Alcaraz once again, left wide open behind the arc, managed to sink another three, 21 – 17.

The Cobras sank in another jumper, the last shot of a slow paced third quarter.

The Rams knew they had to step up in the fourth quarter if they wanted to come away with a win. Right off the bat, the Cobras scored a three, 26 – 17.

Senior Juilo Medina and White connected with the basket for back-to-back shots to get within five. As the clock began to wind down, both teams continued to stay aggressive and pushed to get to the basket. However, despite the Rams efforts, it was not enough to overcome the deficit, resulting in the loss.