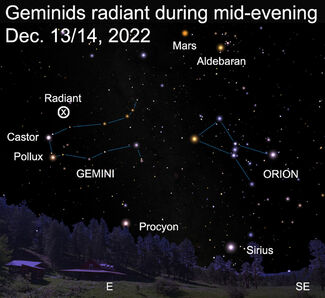 Geminid meteors all seem to radiate from a point in the direction of the constellation Gemini, the twins, which during early evening hours in mid-December appears low in the east-northeastern sky.

It's December, and with it come colder temperatures throughout much of the Northern Hemisphere and, in the sky, the most prolific meteor shower of the year: the Geminids.

Never heard of it? Well, that's not a huge surprise. If you ask beginning stargazers which is the most spectacular meteor shower of the year, I'll bet that many will cite the Perseids of mid-August. I suspect that most would be surprised to learn that the Geminids are often brighter and more plentiful than the Perseids.

For this year's shower, as with many other things in life, there's both good news and bad news. First, the bad news.

During this year's Geminids shower a waning gibbous moon will dominate the late-night sky. This can be a problem since its light will obscure some of the fainter meteors that one might otherwise see. Equally bad for many working folks is that the 2022 Geminids will reach their peak activity during the predawn hours of Wednesday, Dec. 14.

The good news – at least for those who can get away during midweek – is that the Geminids often produce brilliant fireballs that can easily outshine the moonlight.

So how many meteors (also called "shooting" or "falling" stars) might we expect to see under these moonlit conditions? Well, during a typical (moonless) Geminid shower, hourly numbers can reach as high as 100 or 120, so it would be somewhat less than this. But if there are spectacular fireballs like those I've mentioned, you wouldn't remember much else anyway!

If the Geminids are so bright and numerous, why don't people cite them as their favorite? My guess is because the shower occurs during the wintertime when most people are reluctant to brave the cold to watch lights falling from the sky. Too bad, because I've always felt that the Geminids can easily be the best shower of the year – even under moonlight.

Geminid meteors all seem to radiate from a point in the direction of the constellation Gemini, the twins, which during early evening hours in mid-December appears low in the east-northeastern sky. This means that skywatchers who can't stay up until the wee hours can at least catch some nice meteor activity before retiring for the night – another piece of good news.

Around midnight Gemini will lie nearly overhead, and we'll see meteors falling all around us -- but always coming from the direction of the radiant just west of the star Castor. During the pre-dawn hours when the Geminids should reach their peak, Gemini and the radiant will lie in the western sky.

My recommendations for watching the Geminid meteor shower are simple. First, be sure to dress warmly and have on hand a thermos of hot chocolate, for example, to make the night even more enjoyable. Next, head out away from the city lights where the only distraction is the moonlight. And, finally, lie back on a sleeping bag or lawn chair and scan the entire sky with your eyes.

If you can't get away to catch some great Geminids this year, you'll want to put this shower on your observing list for 2023 when moonlight will be no issue at all.