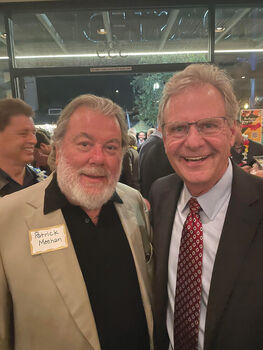 It was a great gathering to celebrate the re-election of Supervisor Jim Desmond at the Toasted Gastrobrunch Restaurant in Oceanside on Nov. 29.

Supervisor Desmond was re-elected in the general election with a 61% to 39% over challenger, Democrat Tiffany Boyd-Hodgson, a small business owner and Vallecitos Water District Director. He represents San Diego County's District 5, which is the county's largest in terms of size, District 5 has 700,000 residents and is noted for agriculture and considerable forest land. The district includes four major North County cities: Escondido, Oceanside, San Marcos and Vista.

His wife Kerri told the Borrego Sun, "It had been a hard slog for three months but is finally over."

The restaurant was full of jubilant attendees basking in the success of the Supervisor's win. The food was great and what a wonderful celebration.

Supervisor Desmond noted that he is, "pleased the election its over and now can get back to work."

The Borrego folks, led by Sun publisher Patrick Meehan, were so happy to see Supervisor Desmond re-elected, as he does so much for the town and it would have been a disaster if he had failed. Others present from Borrego were Harry Turner, General Manager and COO of Rams Hill, as well as Sarah and Lee Rogers, among others.

Speeches were made by Supervisor Desmond and his illustrious team.

We sure are lucky to have Supervisor Jim Desmond for another four years.