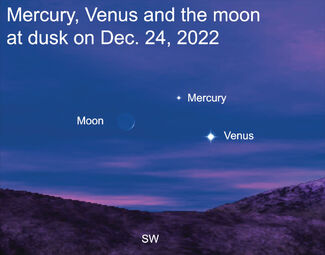 On Saturday, Dec. 24 the (very) thin crescent moon will create a beautiful sight to the left of Mercury and Venus after sunset.

It's always fun to ask stargazers why they believe that, if Mercury is the closest planet to the sun, it's not also the hottest of our Solar system. That honor belongs to Venus, nearly twice as far from the searing heat of our star.

The reason, of course, is rather simple. Venus is shrouded by a thick cloudy atmosphere of mostly carbon dioxide gas that acts like a blanket and holds in heat. Mercury, on the other hand, has virtually no atmosphere so, while it's still quite hot, much of the sun's heat captured by its surface during the daytime can radiate back into space during the Mercurian night.

Another difference between the two planets is how bright they appear in our sky. The Venusian atmosphere serves as a highly efficient reflector that shoots back into space nearly two-thirds of all sunlight falling on it. The darker rocky surface of Mercury, by contrast, reflects only 11% of the sunlight it receives. This means that the two planets appear strikingly different in brightness and color.

This week stargazers have a great chance to check out our Solar system's two innermost planets as they appear near one another shortly after sunset.

You'll have little trouble spotting Venus; it shines low in the southwestern sky at dusk with a brilliant white light and is easily the brightest object in the evening sky.

Above and to its left you should see Mercury, appearing as a fainter, yellowish "star." If you spot it, you can consider yourself fortunate; it's been said that the great 16th century Polish astronomer Nicolaus Copernicus – who calculated the movements of the planets – never actually saw this world with his own eyes.

If you aim a small telescope toward Venus, you'll see only a tiny white disk. That's because Venus is currently on the opposite side of the sun – about as distant as it can ever become and is directly lit by sunlight. Give it a few more months, however, and this planet will swing around to our side of the sun. When it does, it will appear higher and brighter in our western sky at dusk and will appear in a quarter phase by spring and a crescent shape by summer.

Next, try aiming your telescope toward Mercury, but don't be surprised by how tiny and blurry it appears. First off, this planet is barely the size of the continental United States. And secondly, its appearance near the horizon means that its light must pass through a tremendous amount of distorting atmosphere before reaching our eyes.

If you're lucky enough to see a steady image, you might notice that Mercury now appears in a nearly full phase. Keep watch over the next week or so and you'll see it gradually evolve into a crescent before vanishing in the sun's glare near the end of the month.

If you have trouble spotting these planets, on Saturday, Dec. 24 the (very) thin crescent moon will create a beautiful sight to the left of this pair after sunset. The following night the thicker crescent moon will appear much easier to spot above and to their left.