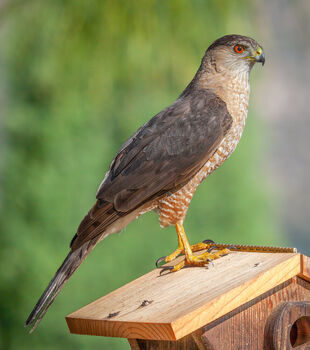 Count yourself lucky if you spot a Cooper's Hawk while out and about in Borrego Springs.

This beautiful hawk is a migratory visitor and uncommon winter resident of the desert, but the active birder can spot them around Borrego Valley, including recent sightings at the Anza-Borrego Desert Visitor Center, Coyote Canyon and Borrego Springs Resort.

The Cooper's hawk is a striking raptor, about the size of a crow. They have a barred, reddish-brown chest, blue-gray back and head cap. They have a distinctly banded tail with white-tipped feathers. Males are significantly smaller than females, which is common among raptor species.

The Cooper's hawk is frequently confused with the sharp-shinned hawk that is quite similar in coloration, but generally thinner and the gray head cap is less defined.

You may often see this hawk close to the ground as it swoops in to capture a quail or other small bird, including songbirds and doves. You may also see them perched in a tree near a watering or feeding location waiting for prey to arrive, and it's an impressive sight to see them flying at full speed through gaps in vegetation to capture its prey.

While the Cooper's Hawk prefers small birds, it will also feed on small rodents and mammals.

Cooper's hawks are migratory, and the oldest known bird lived more than 20, having been banned in California in 1986, and found in Washington in 2006.