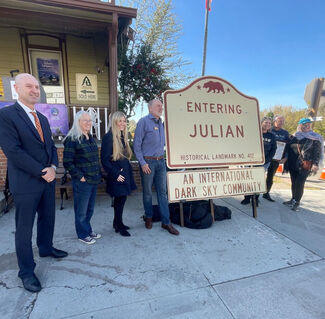 It may sound like a strange metaphor, but the spotlight is now on the mountain community of Julian for being recognized internationally as a dark sky community.

It's not an easy task to earn the title and took more than five years to achieve.

It became official on Nov. 4 when Caltrans installed signs along highways entering town that let travelers know they are entering a special place.

Julian became the 13th IDSC worldwide and the second in California, the other being Borrego Springs that helped with the certification process.

Interest in preserving the dark nighttime skies of Julian began with local amateur astronomer Doug Sollosy who operates Curiosity Peak Observatory at his home east of town. He has long recognized the value of a place where people can come to see the wonders of a clear, dark sky, absent of light pollution.

With others who shared similar interests, Sollosy created the Julian Dark Sky Network in 2016 to help others learn about and enjoy the unique heavenly views from Julian.

Through an educational effort, the movement to get Julian built support as local Realtors, businesses, Chamber of Commerce, Historical Society and conservations groups joined in.

The nearby Santa Ysabel Nature Center even installed a dark sky exhibit for visitors.

The group promoting dark skies worked with those who were reluctant to lighting restrictions, helping to show them how lighting could be adapted that was safe and effective, but less expensive and helped preserve the night sky.

The County of San Diego was very helpful in crafting and adopting new lighting regulations for the Julian community. This is now a model available to other communities who are considering similar efforts, which currently includes Valley Center.

The Julian effort was assisted by the Borrego Springs Sponsor Group and the Anza-Borrego Desert Natural History Association.

In announcing that Julian had earned the Dark Sky designation, the community was praised for its efforts.

"The dedication of the Julian Dark Sky Network to achieving today's outcome is significant for all of San Diego County," said IDA Executive Director Ruskin Hartley. "A path forward to IDSA accreditation has been opened for unincorporated cities and towns there because of the Network's efforts."

One of the primary requirements of the IDA was that the county adopt a quality outdoor lighting policy.

"Like Julian, Borrego Springs is an unincorporated municipality whose lighting policy is now formally codified in the county law," Hartley said.

There are many places in the world today, especially urban centers, where children have never seen stars or the Milky Way.

"We are at a threshold point where we can decisively reverse decades of growing regional light pollution and see the emergence of a whole region of dark sky appreciation and preservation," Sollosy said.