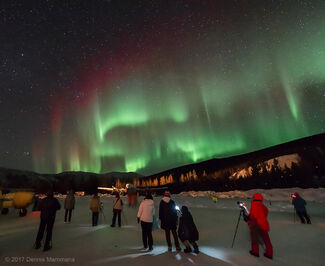 Over the past century of aurora research, we've learned that these mystical lights owe their origin to the sun.

Stand just once beneath the shimmering curtains of the northern lights – the aurora borealis – and you will never forget the experience. They are without question the most hauntingly beautiful and unearthly of all natural phenomena.

A typical auroral display begins as a diffuse arc during late evenings. As the arc brightens and drifts slowly across the sky, new ones may form in its place. Within these may appear intricate ripples and curls that dance along the arc, giving the impression of curtains blowing gently in the breeze. Their colors can range from a faint grayish green to brilliant yellow-green, crimson, purple and sometimes even blue.

Such displays have mystified and inspired sky watchers for ages. Some tribes of North American Indians believed the aurora to be the light of lanterns carried by spirits seeking the souls of dead hunters. During the Middle Ages in Europe, the lights were believed to be the breath of brave soldiers who gave their lives as they battled forever in the skies for their king and country. And Indigenous Australians believed the aurora australis (the southern lights) to be a dance of the gods across their southern sky.

Witness them just once and you'll completely understand.

Today, of course, we strive for a more scientific appreciation. Over the past century of aurora research, we've learned that these mystical lights owe their origin to the sun. Our star continuously belches into space electrically charged particles and sometimes erupts in violent "coronal mass ejections." Some of these particles are captured by our planet's magnetic field and slam into the polar regions of our upper atmosphere, causing atoms of oxygen and nitrogen to glow a variety of undulating colors.

Residents of arctic regions are treated to these magical lights almost nightly, but those in lower latitudes certainly aren't excluded – especially now as the sun is approaching the top of its 11-year activity cycle ("solar maximum"). At times of Solar max, auroral storms can become even more powerful and frequent and can enable sky watchers in southern Canada and the northern tier of U.S. states to see the spectacle. In fact, during the most recent Solar maximums, stargazers as far south as Florida, Texas, Arizona and Southern California enjoyed viewing several massive displays as undulating waves of greenish-gray or deep crimson. We could see these again over the next few years.

Of course, to see the lights in their true splendor one must travel northward, to places like Alaska, Iceland and Norway, where they can be seen dancing majestically across the sky on just about every clear night.

If this amazing experience is on your bucket list – or if you'd like to give a gift that is truly out of this world – I hope you'll consider joining me for my exciting March 2023 Alaska Northern Lights tour, where you will learn to forecast, watch and even photograph the lights like a pro. For more details about this once-in-a-lifetime cosmic adventure, visit melitatrips.com/alaska-northern-lights, and use promo code DMAK23.

Wherever you live – or wherever you travel – keep your eyes skyward, for the aurora borealis is one sky show you definitely don't want to miss!