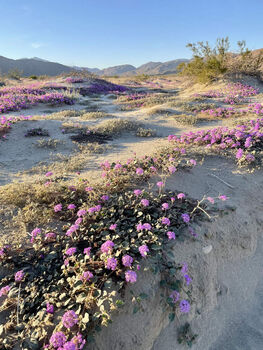 It looks like various flowers are beginning to make an appearance early this season in Borrego Springs. However, the question still remain if there will be a "Super Bloom" in the spring.

Along S22, many can spot a purple field of blooming sand verbena, Abronia villosa. There are also desert sunflowers making their appearances, as well as chinchweed, Pectis papposa near Borrego Springs Road.

Tom Chester has provided a bloom status update as of Nov. 8.

These wonderful fall blooms are the result of the best summer and fall rain that we've had in years. It rained at least someplace in our desert area, primarily in the desert transition area of our mountains, every month in the last six months, at a time of year when there is often essentially no rain.

There were widespread monsoonal storms in the mountains, and sometimes in the adjoining desert areas, in June, July, and August 2022. In week after week in July and August, thunderstorms formed in the Garner Valley area of the San Jacinto Mountains and drifted toward the Borrego Desert, dumping rain on the Santa Rosa Mountains and the nearby desert floor.

The capper was when the remnants of Tropical Storm Kay dropped as much as four inches of rain in places on the desert slopes and mountain crests of San Diego County in mid-September. Ranchita got four inches from that storm, following four inches from a previous monsoonal storm earlier, and the desert area near Borrego Springs received 1.5 inches.

There was additional rainfall in October both from monsoonal storms and from a cutoff low.

As a result, almost the entire Desert Transition area, the area west and north of the desert floor, has at least some fall blooms, and some areas look gorgeous. Even areas of the desert floor, in Borrego Springs, and from Vallecito County Park to Carrizo Creek, have abundant blooms.

Many, but not all, of the areas with good blooms are documented at iNat, mostly by Fred Melgert and Carla Hoegen. As of 8 November 2022, there are 452 observations (209 from Fred and Carla) of Pectis papposa (218 obs); Bahiopsis parishii (82 obs); Abronia villosa (76 obs); and Amaranthus fimbriatus (76 obs)."