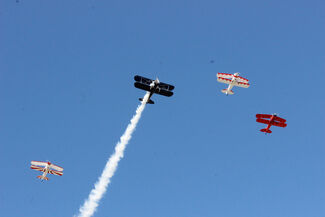 The 2022 56th Annual Borrego Days Desert Festival was back again, slated to be better, as it kicked off the new season here in Borrego Springs.

Under the leadership of Chamber of Commerce Executive Director Françoise Rhodes, taking charge of the Festival again in her tenure as Director, and backed by volunteers, who made sure that the highly anticipated Festival was able to be put on this year and live up to the excitement.

Through all the struggles and various obstacles in preparing for the event, it was a pleasure to see all those in attendance enjoying a weekend of fun, laughter and great outdoor weather in the heart of Borrego Springs on Oct. 22 and Oct. 23.

There was once again no parade this year, much to the disappointment of many, despite the previous mention last year that the parade would return with "entrants already signed up." But with putting on a parade, it does take the efforts of many volunteers, so many should consider signing up for next Festival in hopes of the Parade returning again.

Despite the scaled down version with no parade that could have possibly affected the number of visitors, the attendance was over 5,000 people, up from last year's attendance. Even the wind did not stop Festival go-ers or vendors from leaving.

"Borrego Days 56 was a huge success! Mother Nature tried to disrupt us but a few broken canopies were no match for the resourceful and experienced vendors and team of volunteers that helped to quickly get things straightened out," Rhodes said. "At this very minute, it is the day after the festival and the papers deadline is just minutes away so the full rundown of all the excitement and all of the many people to thank will have to come next time. Until then, I along with so many others are exhausted and happy. The season is HERE!"

Rhodes added, "To sign up for the free Chamber Weekly eblast sent every Wednesday and available to all, send an email to visitborrego@gmail.com with the word eblast in the subject line, we'll do the rest."

To open the 56th Annual Borrego Days weekend, Jackette Williams and sister Bretney Jill Barling sang the National Anthem beautifully, as the Borrego Springs Fire Protection District led the way down Palm Canyon Drive to ring-in the Festival. Following the BSFPD was CalFire and Borrego's Paramedics, as well as the American Legion Post 853 and "The Beast," its well-oiled 1944 Scout Car and Miss Borrego 2022 and her court. The De Anza Villains bike group also made their way down to end it.

After a brief wait, all eyes looked to the sky as five planes, courtesy of Bill Bancroft and the San Diego International Aerobatic Club Chapter 36 (IAC 36) flew over Palm Canyon Drive. They also displayed the "Missing Man" Formation, in honor of our fellow Borregan Mike Himmerich, who passed away earlier this year.

At the Circle, there were many vendors – new, some returnees – music, an expanded kids zone, adult beer garden and the "Shine and Show" car show, which were all enjoyed by locals and visitors.

During the announcements at 12:30 p.m., Rhodes welcomed all in attendance to the annual Festival. Our newly-crowned Miss Borrego 2022 – 23 Hannah Strate, First Princess Shantell Fuentes and Second Princess Alessandra Reyes introduced themselves to the crowd and shared a few words, as well as Co-Honorary Mayors Jim and Anne Wermers, and Chamber President Clint Brandin gave speeches.

Two awards were presented this year on behalf of the Chamber of Commerce: "The Mike Himmerich Dedicated Volunteer Award" and "The Gayle Rae Outstanding Community Service Award."

Judy Lewis received the first ever "Mike Himmerich Dedicated Volunteer Award," which goes to a Chamber of Commerce Volunteer who has provided outstanding passion and dedication.

Sarah and Lee Rogers then received "The Gayle Rae Outstanding Community Service Award" for all the work they have done for the town in the fight against the placements of Sexual Violent Predators.

Many continued to enjoy what the Festival had to offer, and danced to the music of Borrego favorites: Soul Frenzi, Deb Shepard & the Hickory Wind Band. And families gathered to watch the wonderful dance stylings of the Baile Folklorico Dancers and the Elementary After-School Dance team.

Again, despite the absence of the obvious "big" parts of the Borrego Days Desert Festival, it did not take away the successes it brought this year, as it was enjoyed by all. Three cheers for the all-volunteer force for another great year, and I know many look forward to next time.